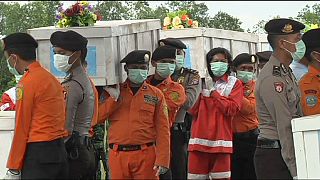 Victims of the AirAsia jet that crashed into the Java Sea last month are transferred from a helicopter to a military aircraft. Indonesian divers on Thursday (January 22) found six bodies near the fuselage of the plane. Meanwhile an operation to raise part of the wreckage from the sea was delayed due to poor weather.