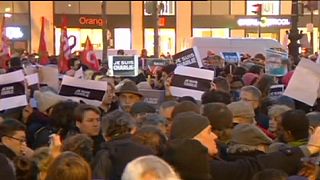 Thousands of people gathered in Place de la Republique in downtown Paris on Wednesday for a vigil following the killing of 12 people at the offices of Charlie Hebdo satirical newspaper earlier in the day. People gathered in silence, occasionally clapping hands and shouting in support of the French newspaper. Some held candles while others raised pens as a symbol of free speech. Meanwhile at the Elysee Palace in the French capital, France’s top religious leaders met with President Francois Hollande.