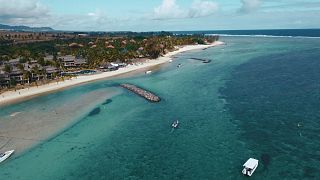 As the world reopens after COVID, more of us are jetting off to far-flung destinations. And, as global floods, forest fires and droughts intensify as a result of climate change, sustainable travel is finally going mainstream.

According to new data from the World Travel and Tourism Council (WTTC), eco-conscious efforts by the industry are paying of..

The findings reveal how the travel sector was responsible for 8.1 per cent of global greenhouse gas emissions in 2019, down from previous estimates of 11 per cent.

The report shows that between 2010 and 2019, the industry’s gross domestic product grew on average by 4.3 per cent annually, while its environmental footprint increased by 2.4 per cent.

Announcing the findings on the second day of the WTTC Global Summit, its president and chief executive Julia Simpson said the “ground-breaking” report will allow the industry to measure and track the sector's climate footprint.

“Until now we did not have a sector-wide way to accurately measure our climate footprint. This data will give governments the detailed information they need to make progress against the Paris Agreement and the UN Sustainable Development Goals,” she says.

“8.1% is the stake in the ground. The key is to become more efficient and decoupling the rate at which we grow from the amount of energy we consume. From today, every decision, every change, will lead to a better and brighter future for all.”

What is the cruise industry doing to become more sustainable?

For the president and CEO of the Cruise Lines International Association, Kelly Craighead, the cruise industry is also steaming ahead in the journey towards sustainable travel.

Speaking to Euronews Travel in Riyadh, Craighead says, “The path towards net carbon zero cruising is a path that was started years ago.

“So, some of the things that the cruise industry is doing to achieve these ambitious targets is rebuilding or retrofitting older ships to be able to take some of these new sustainable fuels, but also the new builds that are coming out.

“Nearly 60 per cent of all the new ships that will be coming out over the next five years are all capable of using sustainable fuels and sustainable. LNG, biofuels, synthetic fuels.”

The global recovery and efforts in Ukraine

As well as celebrating the decline in greenhouse gas emissions, industry leaders spoke about the growth of tourism around the world, predicting that demand would continue to outstrip supply, despite recession fears.

“Travel and tourism used to generate about $9.6 trillion (€9.2 trillion) globally,” says Simpson, adding that at the end of this year it will be back to about $8.5 trillion. “You might say there's still a big trillion-dollar deficit, but a lot of that is China, which is yet to reopen.”

“Business is very strong,” he says. “It’s been a faster recovery than I expected and it’s looking fairly good actually for the first semester of 2023.

“With the notable exception of China and Southeast Asia, Europe is very strong, the Middle East is on fire. South America is better than I ever projected.”

The war in Ukraine has seen the industry pull together to support hospitality colleagues and refugees in whatever way it can.

“Our members in travel and tourism and hospitality have been doing a great job,” says Simpson.

“They've been keeping hotels open in Kyiv, they've been opening the doors of their hotels to refugees in bordering countries such as Poland.

“Our travel and tourism sector is trying to do what it can and we will be there also to help rebuild Ukraine.”

Bazin is also passionate about helping his Ukrainian colleagues..

“Accor is the largest hotel operator in Ukraine,” he says. “We have 4,000 people there and we’ve been providing them with a job in the other Accor hotels. So it's very close to me and I hope it's going to end soon.”

The future of virtual travel

For its 22nd edition, Saudi invited the world to be virtually present at the WTTC event via the metaverse, an example of its pioneering three-year Digital Tourism Strategy.

And it’s not the first time the nation has embraced virtual reality.

Earlier this month, the Saudi city of AlUla became the first-ever Unesco World Heritage Site to be recreated in the virtual world, with Hegra’s Tomb of Lihyan open for visitors in Decentraland, an Ethereum-powered virtual platform, marking a new age of futuristic travel.

“AlUla entered the metaverse with a very early example of what can be achieved in this virtual world, and we will be looking to continue to explore and leverage this space in the future,” said AlUla chief marketing officer Philip Jones.

“Technology is a fantastic way to pique the interest of travellers to get them excited and engaged with the destination and push them further down the path to conversion.”

The development is just the latest in a string of openings and attractions to pique the interest of travellers, catapulting the ancient landscape into the 21st century.

Today, the sand-swept dunes and historic dwellings have come to life once again as part of Saudi Arabia’s tourism strategy Vision 2030, with developments including sustainable five-star hotels, world-class events and an international airport offering direct flights from Paris, Dubai, Cairo and Jordan.

“We are on track to achieve targets of more than 240,000 visitors a year and working towards our target of two million a year by 2035 in line with the growth of the destination,” says Jones.