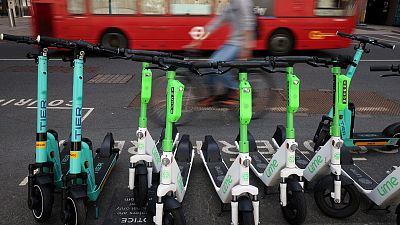 E-scooters have become an increasingly common sight in UK cities, as many people opt for the eco-friendly, no-strings-attached way of getting around.

They’ve had some trouble integrating into the transport system, however, as the latest government statistics on road casualties show.

More than 500 people were injured in collisions involving the electric scooters in London alone last year, up from 250 in 2020.

Elly Baker, transport spokesperson for Labour’s London Assembly - which holds the Mayor to account - says the data makes the case for “robust regulation” around e-scooter use.

"It is concerning to see these figures which show that in many cases e-scooters are still being used dangerously, putting the most vulnerable Londoners at risk,” she says.

It comes a week after Transport for London (TfL) announced it would be extending the trial rental scheme for another six months, until November 2022.

The government has also just suggested that e-scooters could be included in an upcoming Transport Bill, which would pave the way for improved safety regulations and licensing.

Baker adds, “It is crucial that we look very carefully at the data to confirm whether e-scooters can indeed make a positive contribution to London’s transport ecosystem.”

How dangerous are e-scooters in the UK?

There were 1,359 casualties in collisions involving e-scooters last year in England, Scotland and Wales, up from 484 the previous year: a 280 per cent increase according to the latest factsheet.

Almost 400 of these incidents were serious, and nine e-scooter riders were killed.

The government report describes riders as “vulnerable”, lacking the protection of a vehicle body in the way car users have, and harder to see on the road.

Pedestrians have also been caught up in accidents, with injured walkers rising from 57 in 2020 to 223 last year, including 63 who were seriously hurt. Meanwhile the number of injured cyclists tripled in 2021.

As privately-owned e-scooters are banned on public roads and pavements, the public fleets - operated by Tier, Dott and Lime in the capital - are the only way to ride.

These are fitted with safety features, including a restricted speed limit of 12.5 miles per hour, larger wheels, wider footboards, and lights that are always on.

There has been a huge uptake for the sustainable mode of travel, in cities across Europe.

Since the TFL trial scheme began last June, more than one million journeys have been made in London. During that time, the capital’s three main operators have recorded only 16 serious injuries by users.