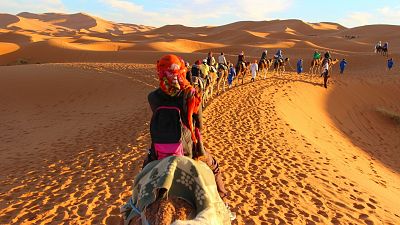 Morocco lifted its ban on international flights and reopened to tourists on 7 February 2022.

In November, the country banned international flights and ferry services as the omicron variant spread around the world. Only people with special exemptions could enter.

With the evolution of the epidemiological situation, the government announced that Morocco would be "fully open" to tourists.

What are the rules for entering the country?

All passengers travelling to Morocco must present a vaccination pass and a negative PCR test result less than 48 hours old before boarding the plane.

Before boarding, passengers must also present a health form.

Upon arrival at the airports, you will be screened by a rapid testing system. And random PCR tests will also be conducted for several groups of travellers, with results communicated at a later date.

There are no entry requirements for children under 6 years old. For those between 6 and 18, the only requirement is a negative PCR test less than 48 hours old, in addition to a rapid antigen test on arrival.

Visitors should also take into account that once in Morocco, masks and temperature checks are required at cafes, restaurants, cultural sites, on public transport and in taxis.

Here are some reasons you should visit this North African country.

On Morocco’s Atlantic coast, the town of Essaouira is perhaps best known for its link to Game of Thrones.

It was used as the filming location for the fictional city of Astapor in season three of the TV series. You might recognise it from the scene where Daenerys first meets her army of the Unsullied.

Aside from its appearance on the small screen, the UNESCO World Heritage-listed city is also a hub for culture. Meandering through its narrow alleys you’ll find shops selling local arts and crafts, restaurants and cafes. There’s far more than the standard pottery stalls and rugs to be found here.

Beware, though, as it’s also known for how windy it is. You might want to cover up your hair and be careful when walking on the seafront, especially if you’re with small children.

One of the top reasons to visit Morocco has to be the food. Smells of authentically spiced tagines, falafel and pastries waft through the streets of most cities. Mint tea is a welcoming gesture in Moroccan culture so you’re almost certain to be offered this sweet green tea during your stay too.

If you want a really traditional taste of Morocco’s cuisine then head to the Berber villages and camps for homemade food. Called Amazigh, the traditional cuisine has a range of different influences from across North Africa including the Atlas Mountains and the Sahara Desert.

This two and a half acre botanical garden was restored by Yves Saint Laurent and his partner in 1980.

It was originally designed by painter Jacques Majorelle in the 1920s using an artist’s colour palette.

Water is central to the garden with lily ponds, fountains and streams offering a welcome oasis in the centre of the hot city. As well as a vast collection of plants there’s a courtyard cafe, book and photography shop and a boutique selling items inspired by Saint Laurent. Visit Jardin Majorelle’s website to book your tickets.

Browse the stalls at a Souk

Souks are probably one of Morocco’s best-known attractions. These markets can be found in most cities and towns selling everything from pottery, fabrics and furniture to slippers and musical instruments.

Most travellers pass through Marrakech during their time in the country and here you can find some of the biggest and best souks. Each sells its own selection of goods but if you are looking for incredible food then head to Jemaa el-Fna square once night falls. Here there are hundreds of stalls selling a range of foods.

In the centre of the square, storytellers practice a traditional Moroccan art that is a fusion of music, comedy and current events. It's well worth taking the time to sit and savour the experience while you eat.

If you decide to take a stroll through a souk, be aware of who’s around you. Pickpockets are very common so avoid wearing flashy jewellery or carrying lots of cash.

Warm weather and cheap accommodation mean Morocco is quickly becoming one of the most popular surf destinations in the world. The best time to visit is between December and March but with 1,835km of coastline, there are good waves to be found all year round.

There are loads of great beaches near popular cities like Rabat or Agadir but if you are looking for a serious challenge then head to Morocco’s capital of surfing, Taghazout. Within 15 minutes of this fishing village, there are more than 20 world-class spots to check out.

Sunrise in the Sahara

Camping in the Sahara Desert might seem like a daunting prospect but it is the best way to experience its stunning beauty. Plenty of tour operators run trips where everything is arranged for you.

The incredible untainted view of the stars is one of the main reasons to venture out into the sands of the world’s largest desert. Isolated from big cities or towns there is little to no light pollution so you can see hundreds of constellations and even the Milky Way in all its glory.

Once dawn breaks you’ll be able to watch the landscape transform as the sun rises over the desert. If camping isn’t for you then you can also take a camel ride out to experience the Sahara.