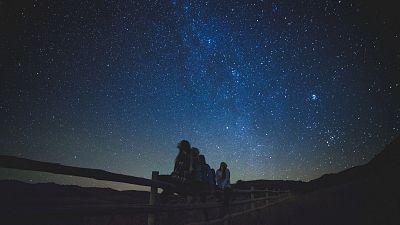 In the absence of much travel around our own planet, more of us have developed an interest in stargazing. Across Europe, there are actually certified parks dedicated to enjoying the night sky.

In February 2020, there were more than 130 registered sites around the world.

Applicants for this certification have to demonstrate a strong commitment from the local community to preserving the natural darkness of the sky - usually by mitigating the effects of light pollution.

In return, the IDSA supports its endeavour by promoting the area for tourism.

The parks have to meet several criteria to be certified by the ISDA. The majority of these parks are in North America, with the state of Minnesota becoming the latest addition to the list in December.

Across Europe, we take a look at the top 15 dark sky parks to give you some inspiration for your next trip.

The UK & Ireland are home to five IDSPs.

First up is the Bodmin Moor Dark Sky Landscape along the Cornish coast in England. This rugged heathland, straight out of an 18th Century novel, is beautiful both day and night with plenty of walkways traversing its craggy cliffs.

Northumberland National Park and Kielder Water & Forest Park in the north of England is already a popular tourist destination during the day. But as everybody else returns to their hotel for the night, you could be out witnessing a magnificent display of nature - the Milky Way.

Elan Valley Estate in Wales has become a popular destination for tourists looking to climb the Brecon Beacons and Snowdonia, both of which are certified IDSPs.

Further north is Galloway Forest Park in Scotland, which is abundant in evergreen forestry and beautiful lakes.

Ballycroy National Park and Wild Nephin Wilderness in Ireland is situated in the Owenduff and Nephin Mountains, this spot is teaming with trees, lakes and moors. It’s the perfect place to escape it all and quite literally stare into space.

Hungary has three IDSPs and so it’s only right that we begin with Bükk, Hungary’s largest national park. Situated in the Bükk Mountains in the north, near the city of Miskolc, the perfect stargazing opportunity awaits you somewhere beneath the country’s tallest peaks.

While Bükk National Park may be Hungary’s largest, Hortobágy National Park has got to be its most impressive. It’s the country’s first ever national park which has remained largely untouched since the last ice age. The park offers nighttime walks to visitors and plans to open an observatory at some point in the future.

Zselic National Landscape Protection Area, close to the border with Slovakia, is deemed the best place with close to unaltered dark night skies in Hungary by the IDSA. Certified in 2009, the parks surrounding municipalities all work to preserve the sky’s natural darkness there.

De Boschplaat is a Natura 2000 nature reserve recognised by the European Council. Situated on the east of Terschelling Island, this IDSP is very visitor-friendly. The public can enjoy unlimited access to the park at all times and there are eight designated stargazing spots to choose from.

Until May 1969, the area which is now Lauwersmeer National Park was underwater, when the former Lauwers Sea was enclosed and separated from the Wadden Sea. The area is now an oasis for wildlife and hundreds of thousands of migratory birds stop here every year. It’s now a dark space to take in the night sky in what the IDSA deem Europe’s most light polluted country.

Petrova gora-Biljeg and Vrani kamen are Croatia’s two main stargazing gems. Petrova gora is known to have the best preserved mountain forests in Croatia and became a protected area in 1969 and an IDSP in 2019.

Not far from the Croatian capital of Zagreb is the country’s second IDSP Vrani Kamen, which spans across 8,000 hectares of the magnificent Papuk mountains.

Albanyà is situated in Girona, Catalonia.. If you head to Bassegoda Park, there are regular educational tours to join as you gaze up at the twinkling stars.

Møn and Nyord are two islands southeast of Denmark. You could be sharing your stargazing experience with quite a few others if you head to Møn, as it’s one of the most popular tourist destinations in Denmark, made famous by its white cliffs. If it’s some time with nature you crave, you would be best heading for the smaller island of Nyord.

Winklmoosalm is a privately-owned space located in the Alps in southeastern Bavaria, and only a stone’s throw away from the Austrian town of Salzburg.

The Alps are stunning at any time of day or year, but the geographical location of Winklmoosalm means it has particularly dark skies according to the IDPA - all the better for stargazing. Astrotourism here began a decade ago, and now enjoys a small income from tourists who come to see the stars.

What’s your favourite spot for stargazing? Let us know on Twitter @euronewstravel.

Escape to another universe at these amazing stargazing spots