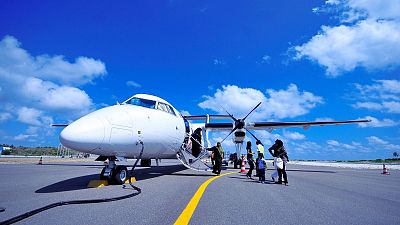 With fewer scheduled flights, some families are flying by jet to reach their destinations.   -   Copyright  Canva
By Euronews Travel  with AP  •  Updated: 04/01/2022

Private jet firms are struggling to buy enough planes to meet the demand for flights in Austria.

Many commercial aeroplanes have been grounded during the pandemic - around 2,200 million fewer passengers flew last year according to the International Civil Aviation Organisation (ICAO). But the private jet business is booming.

Worldwide, the number of business jet flights in November 2021 was almost 60 percent above the same time in 2020, reports German data research company WingX.

“It is very hard, because of the pandemic, to get aeroplanes,” says Manuel Gusterer, the CEO of private jet charter company OysterJet, speaking to the AP newswire from Vienna.

“We have to realise that the market is empty: second-hand airplanes are not available, and even new orders take two to three years at the moment."

Gusterer says he even gets emails asking whether he has any aircraft to sell.

The environmental cost of travelling by jet is eye-wateringly high. The European Federation for Transport and Environment (T&E), which campaigns for clean travel, calculates that private jets are on average ten times more carbon-intensive than standard flights, and 50 times more polluting than trains.

So why is the demand for the small kerosene-guzzling vehicles soaring?

Who is flying by private jet?

The ranks of the jet-set have grown since the start of the pandemic across Europe. But it’s not all champagne and aviator sunglasses.

OysterJets chief pilot Stephane Larrieu has noticed he is carrying a new kind of clientele. Managers of small and medium-sized companies are finding jets a quicker - and often cheaper - way of getting their workers from A to B.

For example, a business-class return from Vienna to Zurich can cost more than €1,000, says Gusterer, compared to around €6,500 in a small private jet.

Avoiding airport crowds, saving time, and being able to pick their destinations are some of the key reasons why people are turning to private air travel.

Avoiding airport crowds, saving time, and being able to pick their destinations more precisely are some of the key reasons why other people are turning to private air travel.

"We have seen two things [since the start of the pandemic],” Larrieu says, “we have seen a new clientele arrive, and a rate of demand for flights which has increased considerably and which, moreover, continues to increase."

Contrary to the clichés, flying private "is a little less glamorous than what you might think" the pilot adds.

“Often the flights are rather short, and for work purposes. So either people are preparing for their meeting or they are relaxing afterwards."

That means “the champagne aspect exists less and less,” with business travellers opting for sparkling water instead.

Dominique Schiller, operations manager at Magnum FBO (Fixed-Base Operator) at Vienna VIP Airport has also noticed a wider range of passengers. They include “families who want to fly on holiday and cannot reach their destination in another way."

The environmental cost of private jet travel - what needs to change?

But despite some changes among the clientele, it’s clear that jetting around Europe is not for everyone.

A report from T&E last year highlighted that just one per cent of people cause 50 per cent of global aviation emissions. An increasing number of rich individuals are turning to private jets that are getting bigger, heavier, and therefore even more polluting.

“It can continue to fly billionaires in polluting planes or it can kick start the shift towards clean fuels and zero emissions planes.”

Dardenne adds that if current trends continue, business aviation emissions in 2050 could be double what they were in 2010.

“To reach net zero emissions, governments must mandate the use of clean technologies and tax private jet users to finance their deployment.

“Rather than contributing to the problem, billionaires can help deliver the sustainable transition by financing zero emissions planes and putting an end to uncontrolled levels of flying.”

There are no circumstances in which the average person needs to fly in a private jet, and just because the option is available, does not make it a morally responsible choice.

Catherine Livesley, founder of No Fly Travel Club, a travel company dedicated to delivering sustainable holidays, agrees that appropriate taxation must be levied on private jet companies, “who are profiting from encouraging a hugely damaging practice.

“This would result in the true environmental cost of this method of travel being passed on to consumers, and hopefully help them think twice.”