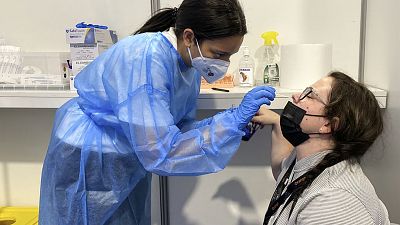 French authorities hope to boost the vaccination rate by ending free COVID-19 screening tests from today, except for those with a medical prescription less than 48 hours old.

People who have already been fully vaccinated will still be allowed to get tested free of charge, and testing will also remain free for students who just turned 18.

From 15 October, PCR tests will cost €44 for unvaccinated adults without a prescription, antigen tests will be charged €22 if they are carried out in a laboratory or €25 in pharmacies, and the previously free self-testing kits (when performed in front of a pharmacist) will be €5.20.

According to France's Ministry of Health, 75 per cent of the population is fully vaccinated but nearly 6 million adults have not yet received a single dose of the vaccine.

They will therefore have to pay out of their own pocket for these tests.

France's health pass is already mandatory in most public spaces and shows proof of double vaccination or a negative coronavirus test in the last 48 hours.

So have any other rules changed across Europe?

Italian citizens must show 'Green Pass' in all workplaces

Italy is introducing a strict, new rule requiring citizens to show the 'Green Pass' in their workplace.

This proves they have had either at least one vaccine dose, recovered from the illness in the last six months, or tested negative in the last 48 hours.

Any employees refusing to comply face suspension without pay and will not be able to access their workplace. The system is already in place for all medical staff and in schools.

Nearly 80 per cent of the over-12s in Italy have been fully vaccinated, according to government statistics.

Any employees refusing to comply face suspension without pay and will not be able to access their workplace.

The country has already seen huge demonstrations against the mandate last weekend, and with businesses facing worker shortages, the government is bracing for more.

Prime Minister Mario Draghi said the government would continue its commitment to complete the vaccination campaign against COVID-19.

In Belgium, the health pass will be mandatory from today for certain public spaces in the capital, while in the southern region of Wallonia the measure will come into effect on November 1.

However, in the northern Flanders region, the pass is not mandatory.

France to extend COVID-19 state of emergency until July 2022