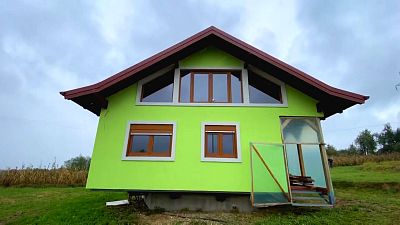 Do you ever wish you could change the view from your bedroom window?

Well one lucky woman in Bosnia can do just that.

After years of dissatisfaction, Ljubica Kusic finally convinced her husband to build a house that can rotate 360 degrees on its foundations.

"I finally had enough time to task myself with granting my wife her wish," says Vojin Kusic, a 72-year-old retiree and former business owner.

The house - described by Kusic as “a monument to [himself]” - is able to rotate due to electric motors and the wheels of an old military vehicle.

No stranger to projects of this kind, Kusic also built the house in which the couple raised their three children.

"When I was building our normal house, she wanted our bedroom to face the sun so that sunrays would wake her up and I accepted that. But this meant that our living room had to go to the opposite side of the house and after some time she complained because it faced away from the road and she said she could not see people entering our front yard,” says Kusic.

“I had to tear down the wall between our two bedrooms to turn them into a living room. It was a very demanding task, it took a lot from me, but I did what she wanted."

But the changes didn't end there.

Six years ago, one of Kusic's children made the house his permanent residence.

"Once again, I had to start tearing down some walls, at which point, before she changed her mind again, I decided to build a new, rotating house so that she can spin it as she pleases. Now our front door is also rotating, so if she spots unwanted guests heading our way, she can spin the house and make them turn away."

At its fastest speed, the spinning house can rotate a full circle in just 22 seconds.

"Children love coming here,” says Kusic, who hopes his family will continue living in the house after he has passed away.

“They love taking a ride in their grandpa's house. It makes me happy to have given them, and myself, that pleasure."