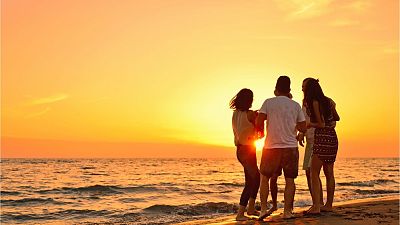 For the whole travel industry, 2020 and 2021 have been the most challenging years since 9/11, when air travel dropped overnight.

For airlines, mass cancellations, redundancies and government loans were the markers of 2020. It was much the same for the early part of 2021. But bookings started to creep back from April onwards. This has mostly been thanks to the vaccine rollout, which has enabled governments to reopen their borders and airlines to restart flights that they had put on hold.

The world’s biggest airlines and airports gathered in Milan this week for World Routes 2021. This is an industry event where the travel industry meets to negotiate new airline routes.

Ryanair, EasyJet and Wizz Air, Europe’s biggest budget airlines, were at the conference, reflecting on the past two years and revealing what travellers can look forward to in 2022 and beyond.

‘Pent-up demand’ is the industry buzz phrase de rigueur. In other words, we’re all desperate to travel after so many months of confinement.

Europe’s low-cost airlines are ready and waiting to take your bookings for the trips you’ve had to delay.

So how are they doing as travel restarts and which airline is best to fly with?

Wizz Air are hot on the heels of the Irish favourite

Ryanair, who call themselves Europe’s ‘cleanest and greenest airline’, say that they don’t even consider themselves in recovery. While most airlines still aren’t flying as many routes as they were pre-pandemic, Ryanair are opening new routes. They already fly 2100, the most of the three airlines, and are launching another 500.

Speaking at World Routes, Ryanair’s Director of Commercial Jason McGuinness said they “compete aggressively across Europe.” While other airlines were cautiously optimistic about the outlook for their business, McGuinness was bullish in his confidence. He was clearly trying to dispel any concerns about Ryanair for the airport representatives in the audience.

This bravado may be because Wizz are hot on their heels as a very viable competitor. They are announcing new routes weekly, they’ll hire 4600 new pilots between now and 2030 and they aim to double the size of their business in the next five years.

When asked how Ryanair feels about Wizz’s stratospheric rise, McGuinness was quick to dismiss the threat, simply saying, “We welcome the competition.” He said they stay on top by keeping fares low and that won’t change.

Interestingly, Ryanair has no plans to start flights to and from Central Asia. This may come as some relief to Wizz CEO József Váradi as Eastern Europe is where the airline started and they continue to open up routes there.

How sustainable can air travel really be?

EasyJet is the oldest child in the family of low-cost airlines, at the grand age of 26. But even with experience on their side Neil Slaven, Director of Network and Airport Development, admitted 2020 and 2021 have been a “very difficult period.”

Like the other airlines, EasyJet are keen to get customers back onboard. They have launched 58 new routes in the last three months, which they say is more than Ryanair and Wizz combined.

They got rid of 10 per cent of their planes in response to COVID-19, but now have 130 Airbus A320neo planes on order. These new aircraft are the most sustainable around, as they use 15 per cent less fuel, create less noise pollution and can carry more passengers.

Wizz also flies these aircraft and are eager to point out that their whole fleet of planes is the newest, on average, out of all the low-cost airlines.

But why do airlines want us to know about what planes they fly? Because they’re becoming increasingly aware that travellers want to be as sustainable as possible.

Of course, not flying at all is the most sustainable option. But it wouldn’t be good business for airlines to make us fly less. Promoting their use of more sustainable planes and giving customers the option to offset their flights is probably as far as they’ll go.

Who has the best customer service?

It was fascinating, as a consumer myself, to be at an aviation conference and hear so little about customer service.

Instead, airlines’ number one priority is keeping costs down. This is not surprising - Ryanair, EasyJet and Wizz owe the UK government a combined total of £1.2 billion in COVID-19 loans.

Focusing on cost also helps them to attract customers: they want to keep their running costs as low as possible so that they can charge lower fares than their competitors. This is how they win your business. And for the most part it works.

Ryanair were in the news just yesterday for not letting customers fly until they had paid back COVID-19 refunds which they say should never have been claimed.

This is only the latest in a long history of Ryanair treating customers with contempt, whether through a £95 (€112) fee to change a flight or extortionate baggage fees. Yet, it doesn’t seem to stop travellers booking with them. If a Ryanair flight is at a convenient time or costs £30 (€35) less than another airline, most will book with them.

Wizz CEO Váradi told me they put an emphasis on onboard customer service by recruiting competent staff. “Around two thirds of our cabin crew have university or college degrees, so they are very well-educated, with the right attitude.”

EasyJet are generally thought of as providing good customer service and say they are ‘industry-leading’ in how they process refunds. Refund vouchers, for instance, have been extended for six months.

If cost is your number one priority then Ryanair will often win out as the cheapest. But you better hope nothing stops you from flying and needing a refund.

With travel restrictions changing at the last minute and the added cost of tests, travel is still more stressful than it was pre-pandemic. Now, more than ever, airlines need to do everything they can to make last minute flight or route changes as pain-free as possible.

Ryanair don’t do this, so I’m ruling them out as my winner. EasyJet and Wizz have been fairly consistent on refunding customers and both put an emphasis on customer service. So I’m awarding them joint first prize as Europe’s best low-cost airlines.