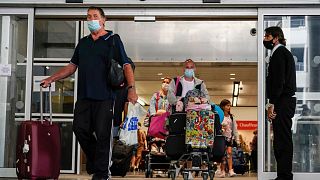 The UK’s new, simplified rules for travel have come into effect today.

The country has previously been operating a traffic light system with red, amber and green list countries, but now a single red list will determine who is safe to travel.

When the UK government announced these changes last month, there was a surge of holiday bookings. This was welcome news to the tourism industry, which had previously criticised the government for its relatively slow return to international travel.

The new system became live at 4am on October 4.

What does the new system mean for people wanting to travel to the UK?

There have been a few significant changes to UK travel alongside the traffic light rehaul.

The UK government has been reviewing its red list every three weeks. Currently, the countries included on the red list are:

You can find out more information here.

What if I travel through a red list country on my way to the UK?

At the moment, the UK government has advised that if you transit through a red list country - even in a private vehicle - you must follow the red list rules upon arrival to the UK.

Travellers must make a record of every country they travel through on their Passenger Locator Form.

What’s next for UK travel?

Industry bosses seem hopeful that the new rules will open up winter travel to and from the UK. Transport secretary Grant Shapps has advised the system will be in place "at least until the new year".

Shapps added, "We are accelerating towards a future where travel continues to reopen safely and remains open for good.”

Will personal wheelchairs soon be allowed as seats on planes?

Australia to reopen to international travellers in November

The first digital nomad village has opened in Croatia