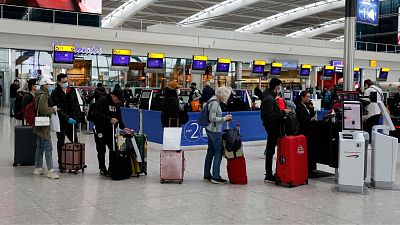 British citizens in the last few months have been unfairly turned away from EU flights because of a confusion over passport expiry dates.

Thought it was already too complicated to fly from the UK to the EU these days? If COVID-19 hadn’t made travel hard enough, Brexit has thrown another spanner in the works for Brits just trying to get away.

If you have been turned away from a flight recently, there’s a chance the government might owe you thousands of pounds in compensation.

The EU requires that travellers from other countries have a passport that’s been issued in the past 10 years and will be valid for three more months after the date you plan to leave the EU.

But the UK has been enforcing stricter rules than this, turning away passengers if they have a passport valid for less than six months.

As a result, many passengers who should have been allowed to enter the EU have been denied the chance altogether.

How did the rules get confused?

In response to the news, the UK government claims that it was just taking a “risk-averse” approach to the two rules - that a passport must have been issued 10 years ago AND have at least three months left upon exiting the EU.

“We make no apology for taking a risk-averse approach to ensure our citizens do not face issues at borders,” a spokesperson says.

While the UK has been stopping people with passports issued more than nine years and nine months ago, the EU has confirmed that the two conditions work independently.

As long as a passport was issued 10 years ago, and has three months left of validity, the passenger is allowed entry.

Who is at fault?

One of the first agencies to put their hands up and admit the mistake is Tui.

It changed its boarding policy to be in line with the EU’s requirements, but it’s taken a number of disgruntled passengers being turned away to reach this point.

We were looking forward to this holiday for two weeks, but it was taken away from us three days before we were due to depart.

Martin Stubbs was planning on flying from Birmingham to Crete with his wife in August. His wife’s passport was valid by the EU’s rules but not by the UK’s so when they rang to check three days before the flight, Tui told him they wouldn’t be allowed to board.

“We were lucky that we could rebook at a cost of £1,005 (€1,176.44). But knowing now they have got the rules wrong, very frustrating,” Martin told Euronews Travel. He is yet to receive a refund or any compensation.

“We were looking forward to this holiday for two weeks, but it was taken away from us three days before we were due to depart.”

Vanessa Pritchard-Wilkes told the Independent that Tui turned her away from a flight from Birmingham to Tenerife last week, even though her passport met the EU’s conditions.

“Following new information provided, we can confirm that we have now changed our policy accordingly. Customers will not be denied boarding on the basis that their passport needs to meet both conditions dependently,” Tui has announced.

EasyJet has also released a statement saying that despite UK government advice not changing, they are now following the information from the European Commission instead.

Could you be owed compensation?

If you have been turned away despite having the proper documentation, you are likely to be owed compensation.

Air passengers’ rights rules say that Brits denied entry to a flight to Europe could be entitled to up to £350 (€409.70) in cash as well as a full refund.

With entire families being turned away, claims are expected to run into the thousands and may cost the government millions in total.