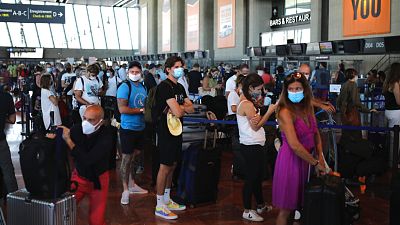 UK border officers have been instructed to stop routinely checking whether travellers from many countries have tested negative for COVID-19.

ISU - the union representing border, immigration and customs workers in the UK - confirmed to Euronews that the new policy applied to people arriving from so-called green and amber list countries under the government’s foreign travel traffic light system.

The change is meant to cut waiting times for airport immigration checks, and the ISU hopes it will reduce verbal abuse against border staff.

But the move is raising concerns that coronavirus cases may be imported at a time when infection rates are already soaring across the country.

The Guardian first reported the shift in policy, citing a leaked government memo. It said the change that came into effect on Monday means border officers no longer have to verify whether new arrivals have had a negative COVID-19 test, have booked one for the coming days or have a passenger locator form showing an address where they will isolate if necessary.

The UK government would not comment on the leaked document, but insists that airlines are required to check all necessary requirements including passenger locator forms, test bookings and vaccination status before travellers board a plane.

A government spokesperson added: "Our utmost priority is protecting the health of the public and our enhanced borders regime is helping reduce the risk of new variants being transmitted.”

"Compliance with these rules is essential in order to protect the population from new variants of COVID-19, and so there will be tough fines for those who do not follow the rules."

Can any travellers confirm the news?

A British traveller returning to the UK from Palermo in Italy - an amber-listed country - confirmed to Euronews that she had flown into Stansted airport on the evening of Monday 19th July. Her PCR test was checked before boarding in Palermo, but on arrival into Stansted she was not asked to show proof of her negative test - only her passport was checked.

Lucy Moreton, professional officer for the union that represents border, immigration and customs workers, also confirmed that staff had been told not to challenge COVID-19 documentation.

"This will undoubtedly reduce the queuing times and hopefully also the raised level of verbal and physical violence experienced by Border Force staff at the hands of frustrated passengers. From that perspective it is welcome," Moreton told Euronews.

However, she cautioned that having checks conducted by airlines alone may not be sufficient to prevent some untested and potentially infected travellers from entering the country.

"The initial presumption when these checks were introduced in summer 2020 was that Border Force would aim to check only about 10 per cent of arrivals. However, non-compliance was so high that ministers then directed that 100 per cent of arrivals be checked," she explained.

"Border Force still encounter hundreds of arrivals every day who have not complied or not complied in full. These travellers will now not be identified," she warned.