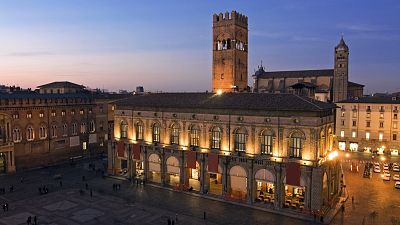 Italy has the most UNESCO World Heritage sites of any country in the world. Not a single one of the 55 sites is found in the city of Bologna but the city’s hoping to change that very soon.

Bologna has submitted an application for its famous porticoes to be considered and is eagerly awaiting the response. A decision will be made by the end of the month.

What is a portico?

A portico is a covered walkway with a roof often supported by columns. Bologna porticoes were first built in the 11th century and they are widespread in this Italian city.

"The portico was intended to be used as a public way of passage, even though the property is private,” explains Elena Bonesi, a local art historian and guide.

“So, every private building had to build a portico by law, but the passage area wasn't their property, and at the same time, the owner had to clean and maintain the portico, which is still the case today."

By 1288, every building owner was required to build a portico by law.

"There are porticoes in other Italian cities, but none have as many as Bologna, because in the historical center, there are about 38 to 40 kilometers of porticoes, and more than 50 if you count those outside the city doors," says Elena.

The city would like to eventually include all it's porticoes in it's UNESCO application but for now just twelve of Bologna’s beautiful covered walkways are being considered for UNESCO World Heritage status.

Watch the video above to see more about Bologna’s beautiful porticoes.