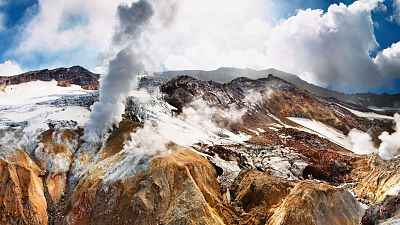 It may surprise you to hear that Europe is covered with volcanoes. No need to worry though, the vast majority are extinct or dormant. Dormant volcanoes are technically active but haven’t erupted for a long time.

They are just expected to erupt again at some stage in the future.

Most of Europe’s volcanoes are concentrated around the Mediterranean or Iceland, on the boundaries between tectonic plates. A volcano is considered active if it erupted in the past 10,000 years but lava can often be seen gushing upwards from many volcanoes much more frequently.

Here’s are four of Europe’s most impressive active volcanoes.

Iceland has approximately 130 volcanoes and Geldingadalir is its newest one. It started erupting around two months ago - the first volcanic activity on the Reykjanes peninsula since the 13th Century.

Since then, it was stable for over a month, before spewing lava into the sky again at the beginning of May. Experts believe the eruption is the beginning of a new period for the region, with activity expected to get more frequent.

Stromboli, or the ‘Lighthouse of the Mediterranean’ is one of the most active volcanoes on Earth. Erupting continuously for the past 2,000 years, it has seen a spike in activity since 1932. One of its most spectacular features is the ‘Sciara del Fuoco’ or Stream of Fire.

This is a giant horseshoe-shaped depression, formed in the last 13,000 years. Relatively quiet since an intense outburst in November 2020, Stromboli started to erupt again in mid-May.

Stromboli, a small island north of #Sicily, is one of the most active volcanoes in the world. pic.twitter.com/aRAbSGrCuu

Santorini, a stunning island off the coast of Greece, is actually a sleeping volcano. Its last major eruption was centuries ago (around 1600 BC) but scientists believe this could soon change.

Small eruptions have taken place since then, the most recent one in 1950. In a study published in March, researchers categorised the island as “high risk for volcanically- and seismically-induced hazards.”

The number one spot had to be reserved for Sicily’s spectacular Mt Etna. Locally called ‘Mongibello,’ it is Europe’s most active volcano.

In just five weeks around March 2021, it erupted more than 16 times. Annually, Mt Etna erupts around 200 times and this number has been increasing.

As well as being one of the largest volcanoes in Europe, it also has the longest historical record. Mt Etna’s eruptions have been documented for more than 2,000 years when it was still part of Ancient Rome.