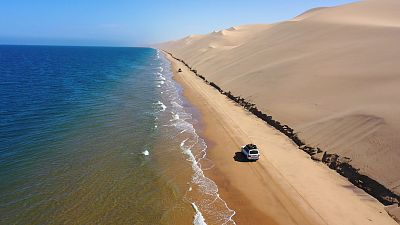 From captivating coastlines to lush lands and wonderful waterways, Angola is realising its tourism potential. Our team travelled some of the country's most amazing sites to give you a glimpse of what awaits to be explored.

One of Angola's biggest attractions in the south west is the Namib desert. It runs from Angola, through Namibia, to South Africa’s Kalahari and is an impressive feat of nature. Local tribes live in the Angolan part of this desert and will happily show you their culture and heritage.

For a unique place to stay after visiting the rich sands, eco-lodges make a comfortable dwelling. For the more adventurous, this area also offers luxury camping or 'glamping'.

Angola is in fact a power, a hidden secret within regional African tourism

After you let the sunset on the Namib desert, there's still plenty more to do. Heading further inland, there are unique fertile lands, waterways and wildlife.

The National Geographic Okavango Wilderness Project team has spent years building up a scientific picture of them. For conservationists, like Stefan van Wyk, Cuando Cubango is special. He tells us that he thinks he'll stay there for the rest of his life. "It’s just a very tranquil place and I see a lot of potential in this area for tourism", he explains.

Roaring down the beach

Back on the coast, the beaches and coastal line can be enjoyed in a rather unique way because Angola was made for 4x4s. They are able to take you special places you may otherwise miss. A group of enthusiasts regularly take 4x4 trips together up to where the river Onzo almost meets the sea.

Alfredo Oliveria, the head of this group of off road fanatics, tells us quite simply that "for anyone who likes nature and doing off-road, Angola is an ideal country, excellent in all aspects".

Biking down the coast

Exploring on two wheels is also a great way to discover Angola. On a motorbike it's possible to stop off at awesome places, like the Miradouro Overlook, which has one of the most memorable views in the world. It's one of the things that makes Angola "an inviting country", according to Jorge Custódio de Almeida, the General Assembly President of the Amigos da Picada motorbike group.

To relax after all that biking, you can wind down in a luxury lodge like The Mubanga. It's a rural retreat with a great evening atmosphere.

A train to take the strain

You can also let the train take the strain in Angola and sit back and admire the passing beauty from the brand-new, luxury Trail of Two Oceans. It’s the first passenger service running from Dar Es Salaam in Tanzania to Lobito, in Angola.

It's a trip that Daphne Mabala, the train manager describes as "very special".

Angola is a country of a thousand facets, unparalleled adventures and unforgettable encounters. It's just waiting to be discovered.