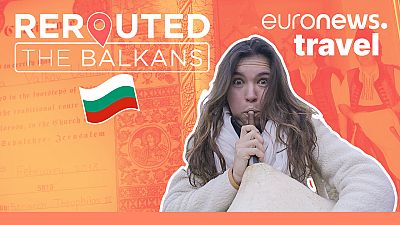 Welcome to our latest video series, Rerouted: The Balkans, which sees social media influencer and YouTuber Eva zu Beck discover the cultures, customs and traditions of Eastern Europe. Eva takes us off-the-beaten-track on a road trip through Romania, Serbia, Bulgaria, North Macedonia and Albania. We meet the wonderful Balkan people bringing a modern twist to ancient traditions and travel through pristine, untouched landscapes. You might not have planned to visit these countries before but one thing’s for sure - they’re about to become top of your travel bucket list.

When you hear the distinctive drone of a bagpipe you may think of Scotland, but the instrument is also one of the most distinctive symbols of folklore music in the Balkans.

In the beautiful mountain town of Chepelare in southern Bulgaria, travel influencer Eva zu Beck met a craftsman who has dedicated his entire life to honouring the bagpipe.

“The bagpipe always sits on the left side next to the heart so you can really hear the sound,” says Ilya Uchikov, who has been playing for over 35 years, more than half his life.

“The music you're making literally has to come from the heart, passing through the fingers to reach the listener. You have to become one with the instrument.”

What’s the history of bagpipes in Bulgaria?

Bagpipes have always been played in Chepelare and the surrounding Smolyan region for entertainment, says Uchikov. They form part of the soul of the Rhodope mountains that surround the town, being played at weddings and celebrations.

Made from cotton, wood and sheepskin, the process of making a bagpipe - a test of patience and perseverance - is a distinctive part of Bulgaria’s musical culture.

How are bagpipes made?

Great skill and loving care goes into crafting every instrument; from salting a sheepskin to preserve it, to allowing the wood to dry for five years before carving the blowpipe.

Given each one is handmade with only the blowpipe, or chanter, fashioned using modern machinery, it’s a time-consuming process.

Always played from above the heart of the musician, in some ways it becomes an extension of them.

Eva had a quick lesson, but despite having a good teacher in Uchikov, she has her work cut out for her if she is to become a true master.

Watch the video above to find out why.

Planning a trip to the Smolyan region

Of course, bagpipe making is only one part of the Smolyan region’s offerings. If you want to explore this southern Bulgarian province, here are some other top tips for things to see and do.

As well as bagpipe crafting, Chepelare’s other claim to fame is being home to Bulgaria’s longest ski run. Despite its comparatively small size to larger resorts in the region, Chepelare is a popular ski destination in Bulgaria, boasting green to black runs.

Other resorts to have on your radar are Pamporovo, one of the largest which also has a thriving music scene.

The ski season in the region usually runs from December to April.

One of the longest caves of its kind in Bulgaria at over 8,000 metres in length, Yagodina is also one of the most visited as well. There have been many archaeological finds in its mostly marble galleries, including plates and tools from the Neolithic period. Besides the standard tourist route, there are guided tours that let you explore the cave’s other galleries that remain restricted to the public.

Given its mountainous terrain, caves and grottos are something of a hallmark of the region. Those near the picturesque village of Trigrad are even believed to have connections to Greek heroes of antiquity. Orpheus is said to have entered the underworld in search of his dead wife Eurydice through a cave nearby called the Devil’s Throat. Locals celebrate the legend every August with parades and folk singing.

The provincial city that gives the region its name is noteworthy for being the highest in Bulgaria. Built largely in the communist era as a model city for the future, the city itself is uniform and sprawling. But one thing you shouldn’t miss is the city’s Raykovo neighbourhood, particularly the historic Cheshite Quarter and its unique houses. Constructed in the 19th century, they give a glimpse into regional life in a bygone era.

Watch the video above to see Eva's adventures in the region.

Bulgaria is a top destination for 2022 wellness breaks - here's why