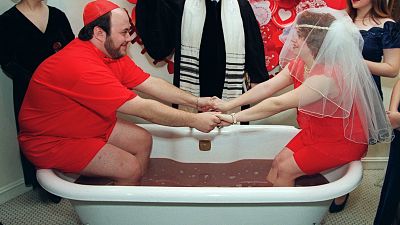 Cheryl Minikes and Matthew Mandell, both 22, from Brooklyn, take the ultimate St. Valentine's Day plunge by getting married in a bathtub full of hot chocolate.   -   Copyright  Timothy A. Clary/ AFP
By Natalia Liubchenkova  •  Updated: 12/02/2021

St. Valentine's Day might not be everybody's piece of cake, yet it still remains popular after centuries. Originating from Europe, its celebratory traditions have spread further than we could have imagined. Turns out that people do a lot for February 14th, with some showcasing their romantic intentions in very peculiar ways indeed. Scroll down to see how the lovers' day is marked around the world.

France took St. Valentine's Day seriously for years, holding the competition for lovers across the country with the winners' inaugurated at Paris' City Hall.

If you think Paris is a city of love - you might be right, but France also has its own Saint Valentine's village!

Chocolate is a big deal on St. Valentine's Day across countries, popular for both internal and external application.

Some extra luck for your marriage in Thailand

St. Valentine's is widely considered to be a special day for the couples to officially register their relationships. 99 couples married on 14 February 1999 in Bangkok.

Passion for shopping counts too

Chocolate boxes aside, retailers often encourage couples for some rather serious shopping, like this Apple store in Tokyo.

Love is in the hair

On St.Valentine's, everybody should feel loved, even if you turn your back to them. Half an hour hair designs were much in demand with fashionable Indian youngsters in 2000s as Valentine's Day approached.

Some serious opposition in India too

This holiday might not be for everybody, but some groups in India took their resistance to the extreme in 2000. Congress party supporters there went out on the protest, saying that Valentine's Day was alien to the Indian culture and encouraged promiscuous behaviour.

The photographs from some years later showed the protesters didn't really succeed in killing the vibe of the lovers' day.

Love does not have age, culture ministry of Guatemala probably suggested organising a special event for elderly couples in Lima. 'Young hearts' the signature on the balloon reads.

Good cause in Iraq

In 2011, protesters in Baghdad asked Iraqi leaders to love their country better.

Love is not a burden

The sport in which a male contestant carries his wife or lover through an obstacle race in the shortest possible time originated in Finland. In 2009 in a shopping mall in Hong Kong, eight contestants competed in a pre-Valentine's Day racing event.

The liaison of a ram named Changmao with a female deer named Chunzi at the Yunnan Wild Animal Park in China's Yunnan province hit the headlines in 2012. The local TV station reporting that attempts to separate the animals have been unsuccessful. The wedding for the couple was then planned on Valentine's Day.

Love for some, tough job for others

Some serious advertising efforts were expended at a marine theme park in Manila in 2009. Must be tough for the underwater Cupid, especially.

Over 200 couples participated in a community civil marriage organised on Valentine's Day in 2013 by the municipality of Comas, northeast of Lima, Peru.

A giant happy Valentine's day poster covered a construction site near a mosque in downtown Beirut in 2013. Valentine's Day was getting increasingly popular in the region as people have taken up the custom of giving flowers, cards, chocolates and gifts to sweethearts to celebrate the occasion.

In Afghanistan, many Afghans are unaware of or don't mark Valentine's Day, but younger generations in urban areas are celebrating the day despite restrictions.

It's all downhill from here...

Over 70 couples gathered to either wed or renew their vows during the ceremony which was officiated in 2017 by Minister Harry Heilmann, of the Universal Life Church.

Pink is the new black

Finding a trendy gift seems to be easy in Kuwait, where the shops were fully subscribed to the Saint Valentine's Day commercial vibe

Saffron: how one of the world’s most expensive spices is made