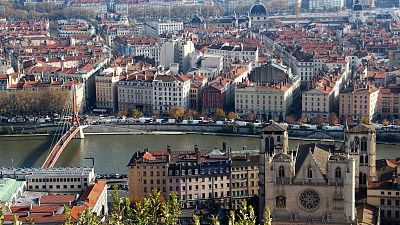 The Old Town in Lyon’s 5th arrondissement is a showcase of the city’s strength. Here, things still stand almost exactly how they stood when silk weavers and wealthy merchants walked the town’s cobbled streets back in the Middle Ages.

The 11th Century choir school is still there, and so is the 15th Century inn. A door frame in a building dating back to the 13th Century is sagging, one side of it higher than the other, but still intact.

Built at the foot of a hill, history feels like it’s literally stacked on top of itself in this town, weaved together by narrow steps, dark alleyways, and the feature that sets Vieux Lyon apart from other European medieval cities: its traboules.

For all the city’s stubborn hardness and gravity-defying rigidity, the reason that these traboules exist can be credited to one of the softest types of fabric in the world: silk.

The traboules are secret passageways within buildings that can be used to cross from one street to another. In many ways, visiting them now feels like an intrusion. Pushing back their unassuming doors could, in any other situation, count as trespassing - which isn’t entirely unwarranted as people still live in a lot of these buildings.

When you finally step inside and close the door behind you, you’re met with a wall of silence. The city noise disappears, and you find yourself in a long tunnel that opens up to a courtyard, where there’s another door that will lead you through another street. Your footsteps echo and you’re more inclined to whisper, not just because you don’t want to disturb the building’s residents, but because being in the traboules gives you a similar feeling to being in a church.

A few hundred years ago though, these passageways were far from quiet. They were busy places of work, and in three separate times the setting of revolutions. In the centre of it all was silk.

The history of silk

In the Middle Ages, the process of manufacturing silk was long and arduous. Weaving took many hours, and at the end of a full day’s work only a few centimetres of the fabric would be produced.

Needless to say, it was expensive, exclusively used by the highest classes in society as a mark of wealth and status. Sumptuary laws were passed, which not only discouraged common people from wearing the fabric, but forbid it.

In 1466, King Louis XI set up a national silk industry in Lyon, consisting largely of Italian workers from the region of Calabria, known for its master silk weavers. By the 16th Century, Lyon was the capital of the European silk trade, and by the middle of the 17th Century, over 14,000 looms were operating in Lyon. At this point, the silk industry fed a third of the city's population.

For the workers, or the Canuts as they were known at the time, the traboules were just as much part of the daily grind as coffee and croissants are today. In Vieux Lyon, there were few streets that ran perpendicular to the river Saone, from where the products would eventually be shipped. These covered passageways enabled the workers to transport their products safely, while providing shelter from bad weather.

But this wouldn’t be a French story without a revolution. The first came in 1831, one of the first worker’s protests in the industrial revolution. The bad economy had resulted in a drop in silk prices, which in turn decreased workers' wages. The workers pushed for a minimum price to be imposed on silk, but laws established during the French Revolution meant the state championed freedom of enterprise and couldn’t intervene in economic affairs.

On top of that, these laws also banned trade unions and workers’ right to strike. The manufacturers, who controlled the silk industry, claimed that introducing a fixed rate was against the principle of freedom of enterprise. They rejected the salary claims of the Canuts, which infuriated them. The workers went into open revolt, seizing control of Vieux Lyon in a bloody battle against the local national guard and military. The government had to send a veteran of the Napoleonic Wars, Marshal Jean-de-Dieu Soult, to restore order. He was able to do so without further bloodshed. So the revolt ended, the minimum price abolished and with the workers no better off.

But that was just the beginning. There were two more Canut revolts to come. The second, in 1834, happened in the midst of a prosperous economy, which caused a huge increase in the workers’ wages. Manufacturers deemed these wages too high and attempted to impose a wage decrease. In a letter by the Interior Minister to the King of France, he wrote: “The manufacture is in a state of simply fabulous prosperity. The orders from America are immense. The workers earn 6 to 7 francs per day. This is too much."

This move caused the workers to rebel, which the government crushed in a bloody battle that would be known later as the Sanglante Semaine, or bloody week. Estimates say that there were between 100-600 casualties. 10,000 were captured and tried in a "gigantic trial" in Paris during April 1835. Many of them were condemned to deportation or strict prison sentences. The third revolt happened in 1848, which was a year of revolution all over Europe.

The Canut revolts were the catalyst that began an era of social movements, with workers fighting for fair rights.

Today, you can still visit some of Lyon’s 400 traboules, and take a peek into how silk slashed and shaped not only this city’s architecture, but also the worker’s rights movement as we know it today.