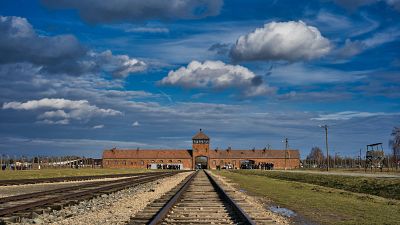 This year’s International Holocaust Remembrance Day will, inevitably, be somewhat different from the usual memorial services held around the world.

The event takes place on 27th January every year to mark the liberation of Auschwitz-Birkenau, the biggest and most notorious Nazi death camp in Europe. Now, the site draws thousands of visitors every year who want to try and process, firsthand, the atrocities of the Second World War.

Beyond Auschwitz, the continent is scattered with tributes to one of humanity’s darkest eras. Currently, some of these memorials are operating under coronavirus restrictions.

Memorial to the Murdered Jews of Europe, Berlin

First opened in 2005, the Memorial to the Murdered Jews of Europe stands close to the Brandenburg Gate.

The undulating design of 2,711 concrete slabs - all varying sizes - might create a sense of disorientation. The idea is to open a discussion as to why.

For some visitors, it replicates the way the world was turned upside down during the Holocaust. The constantly changing levels beneath your feet, coupled with the way the path’s direction frequently alters course, is meant to mirror the sense of dislocation associated with the events of 1941 - 1945.

The grey slabs, tomblike in stature, are in a grid formation so people can walk among them. Open day and night, it offers the chance for quiet contemplation in the heart of the city.

The Wall of Names at the Shoah Memorial, Paris

Located in the historic Marais district of Paris, the Shoah Memorial is a wall engraved with the names of 76,000 Jewish people deported from France during the Nazi regime. Just 2,500 of those sent away survived.

The concept of the wall was ‘understanding the past to illuminate the future’. It was Europe’s first Holocaust archive when it opened to the public in 2005, and - when things are normal - it often hosts temporary exhibitions as tribute to genocides from the 20th Century.

Outside the memorial, the Wall of Righteous names nearly 4,000 men and women who protected Jewish people between 1942 and 1944.

Perhaps one of the most visually striking commemorative installations for the Holocaust is the Shoes on the Daube Promenade in Budapest, Hungary.

This trail of iron artwork represents the thousands of people who were executed along the riverbank during the war.

Szalasi, a fascist, antisemitic organisation operating in Budapest at the time, quickly responded to what they saw happening in Germany in the 1940s. 80,000 Jewish families were exiled from Hungary, and during the march to the Austrian border, 20,000 people were lined up along the river Danube, forced to remove their shoes, and shot.

The design of each individual shoe in the line-up represents how no one - no matter what background, age, gender or profession, was spared.

Schwerte in western Germany was a Nazi sub-camp during the years of the war. Its main memorial was erected in 1990 to commemorate those taken to the Schwerte camp, who were forced into physical labour.

This included the building of a railway line. The memorial depicts five men, faces distorted with pain, carved in stone and lying down to act as the sleepers on the track.

The most well-known holocaust memorial of all, the concentration camp Auschwitz-Birkenau has been transformed into a lasting reminder of what happened behind its gates 76 years ago.

Auschwitz remains closed for now due to coronavirus restrictions, but a virtual commemoration focused on the fate of children in Auschwitz is available online from today.

The Memorial and Museum of Auschwitz has been preserved to show subsequent generations the realities of the Nazi regime.

Holocaust victim was forced to sell the Klint art in 1938