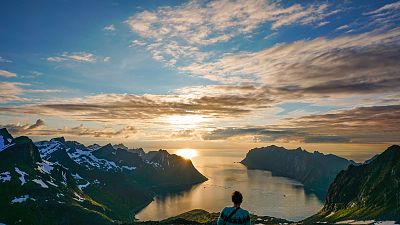 When it comes to making lifestyle choices, you could do worse than follow the advice of the happiest people in the world.

Countries in Scandinavia consistently claim the top spots in the annual World Happiness Report, which takes into account indicators such as individual freedoms, opportunities and wealth, alongside health, social environments and the manner in which we live our lives.

If the results of these surveys are anything to go by, it seems the Nordic countries have cracked it when it comes to living life to the full.

Many Norwegians have a healthy habit of seeking outdoors to both relax, reduce our stress and get physical activity.

It’s arguably for this reason that the Nordic lifestyle has had such global appeal in recent years. First came the notion of 'hygge' (pronounced 'hoo-gah'), one of the Danes’ secrets to living well. While it’s been notoriously hard to translate exactly, it comes down to a feeling of cosiness, homeliness, comfort and enjoying life’s small pleasures.

But while indulging in hygge - reading a book under a blanket by a log fire, for instance - would usually be an ideal activity for a winter’s day, the past year’s seemingly interminable pandemic lockdowns mean that cabin fever is increasingly driving people outdoors.

This is where 'friluftsliv' comes in.

Pronounced 'free-loves-liv,' the Norwegian concept of 'open air living' has gained international attention in recent months - and it’s little wonder. As our mental health becomes stretched to its limits, stuck indoors and away from loved ones, more of us are embracing every means of reconnecting with the outside world.

But according to Bente Lier, Secretary-General of Norsk Friluftsliv (or the Norwegian Outdoor Council), friluftsliv is much more than a fad or a throwaway trend.

"It’s a very long tradition. This has nothing to do with coronavirus. It’s not a trend. This is something that is very big and a very important part of our culture," she says.

The term friluftsliv is believed to have first been coined by Norwegian playwright Henrik Ibsen back in 1859, but seeking time outdoors for recreational purposes has long been a central plank to Norwegian national identity.

"We normally say that Norwegians are born with skis on our own feet," says Bente.

Being outdoors in nature has been proven by sundry scientific studies to have wide-ranging mental health benefits, not least by improving cognitive processing and reducing anxiety.

"It’s probably part of the reason why we lead good lives,” she adds. "Many Norwegians have a healthy habit of seeking outdoors to both relax, reduce our stress and get physical activity".

Relaxing, observing the quietness, resting, being in nature, enjoying the smell of coffee on a bonfire is all friluftsliv.

In a study conducted last year, as many as nine in 10 Norwegians said they felt less stressed and happier when they were outdoors. But even with such impressively high statistics, with the onset of the global pandemic, it’s true to say that Norwegians themselves have a new found appreciation of friluftsliv.

"During corona times, friluftsliv has become even more important to Norwegians because we have had restrictions on restaurants and visiting each other in private homes. More and more people in these times are seeking nature to meet friends, to recreate and escape from their daily worries," Bente explains.

In Norway, the idea of "allemannsretten" - or "the right to roam" in English - permits open access to vast areas of the country regardless of land ownership. This freedom goes hand in hand with friluftsliv, giving Norwegians ample opportunity to swim, hike, ski, camp, forage and so on.

Friluftsliv for Bente, like many Norwegians, means regularly skiing, either in the forests near her Oslo home or at her cabin in the mountains on the weekends. In the summer, she heads to the coast near the capital to go fishing and sailing. “I love to go harvesting mushrooms and berries,” Bente beams.

Attempting such rigorous pursuits may sound daunting to many, but friluftsliv can be boiled down to simpler pleasures outdoors. "I think it’s important not to be too ambitious," Bente advises.

"Relaxing, observing the quietness, resting, being in nature, enjoying the smell of coffee or a bonfire is all friluftsliv," she says.

“It’s good to just go somewhere to see green things. You could go to a lake or you could go and sit on a stone and just listen to the birds and let your thoughts flow.

“Or you could bring your family and maybe you could have your lunch outdoors. I think it’s quite a common experience that if you walk alongside someone, the conversation is often very good; just to have a small walk or maybe even have a meeting, a walking meeting”.

These are Europe's best national parks and forests

Is this the most sought after job in the world?