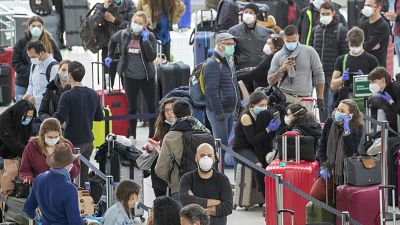 With a new President in place and COVID-19 cases continuing to rise on both sides of the Atlantic, travel restrictions are changing daily.

**We will be monitioring the latest information and updating this article regularly.
**

Can EU and UK travellers get into the USA now?

Yesterday, President Joe Biden reinstated travel restrictions across non-American citizens who have recently been to Brazil, Ireland, South Africa, the United Kingdom and much of Europe. Entry to the States by these groups has been completely suspended.

According to information secured by Reuters, from January 26th Donald Trump planned to rescind travel bans across Europe, the UK and Brazil. While this was under the condition that air travellers presented a negative COVID-19 test, Biden has now blocked the move altogether, tightening restrictions further as the vaccine roll-out continues to take off around the world.

Cast your mind back to this time four years ago. One of Trump’s first acts in office was a travel ban of his own.

Iran, Iraq, Libya, Somalia, Sudan, Syria, and Yemen are the Muslim-majority countries that Trump completely closed the US borders to. As predicted, President Biden has now lifted the controversial ban.

Speaking of travel bans, it’s worth mentioning that earlier this year, on the back of Trump being shunted from the American throne by the adversary, it was reported that he planned on heading to his Turnberry golf resort in Ayshire, Scotland, to boycott the inauguration of the President elect.

Since a strict lockdown has been enforced up and down the UK, Scottish First Minister Nicola Sturgeon advised: “Coming to play golf is not an essential travel purpose”. The internet went off.

A huge part of Biden’s campaign for presidency was the promise that the USA would rejoin The Paris Agreement. Sustainable travel is one of the key priorities outlined in the UN treaty, which was signed in 2015.

While travel is, of course, mostly paused for now, it’s believed the post-pandemic tourism industry will be quite different from what we knew pre-2020. Last year encouraged people to think more about their relationship with the world around them; many had time to reflect on the long term, positive changes they would make to their lifestyle - including holiday habits.

Biden to reverse Trump policies on COVID, race and climate on day one