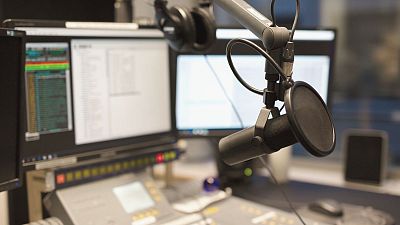 A refugee camp in Iraq is harnessing the power of community radio to tell the true stories of Syrian Kurds in exile, and keep the community connected.

Gardenya FM is a Syrian radio station in Arbat, northeastern Iraq, where some 9,056 residents of the refugee camp are Syrian Kurds, according to the UN High Commissioner for Refugees (UNHCR).

31-year-old Chirine Mohammed presents the news on Gardenya FM. Each day, she can be found outside the station interviewing refugees. She says it’s to "give real information to those back home via our Facebook page, so that our families can see that we are not living in tents".

Mohammed, who has always dreamed of becoming a journalist, jumped at the opportunity when in 2018, UPP, an Italian NGO, offered to train journalists for the small community radio station.

Mohammaed - a former teacher - took the road to exile in 2014 to find her husband who left to avoid military service imposed by the regime of Bashar al-Assad.

"When the Islamic State (IS) group swept into the country, military service was just a pretext to put down the rebellion" in the northeastern Kurdish region, which has long demanded its autonomy, she says.

"The problem is the false information disseminated by the regime" when "everyone has a smartphone and can read anything and everything about Syria," she explains.

Since she has been on the air, she has fought for the truth of information: