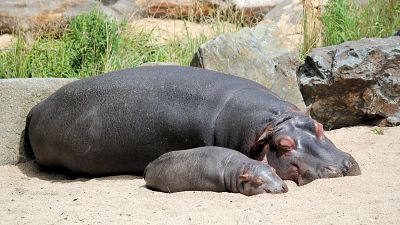 The common hippopotamus is known for their rapacious appetites and spending a lot of time in water, no wonder, 'river horse is the literal English translation of the Greek word Hippopotamus. They spend up to 16 hours a day submerged in rivers and lakes to keep their massive bodies cool under the hot African sun. And in the rest of their time? They consume between 25-40 kilos of grass.

And with these two actions, they already do a lot for their environment. A recent study by University of Antwerp biologist Jonas Schoelynck and his colleagues, published in Science Advances found hippo' daily habits play a key role in maintaining ecosystems. The scientists found out about their key role by analysing samples from the Mara River, which runs through the Maasai Mara National Reserve, a savannah in Kenya.

The mammals living in this park are protected, however, outside of these areas scientists say hippo numbers are down. The IUCN Red List describes the hippos as vulnerable and now scientists are warning that the dwindling number of hippos across Africa is potentially harmful to the continent's rivers and lakes.

Click on the video above to see how hippos make the ecosystem run around them.