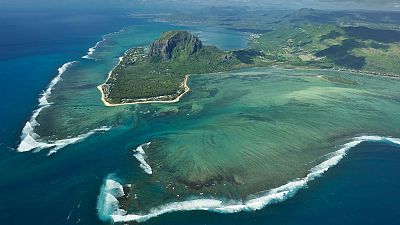 Put simply, Mauritius is a very beautiful place. Overwhelmingly so. While visiting Mauritius in 1897, Mark Twain commented - “Mauritius was made first, and then heaven; and heaven was copied from Mauritius”. With its sapphire waters, white sandy beaches, and seemingly never-ending sunshine, visitors to this small island in the Indian Ocean will quickly find themselves agreeing.

But as Mauritians know, their island’s lush tropical forests and rich underwater life is delicate and needs to be protected for future generations to continue to enjoy it. The island nation has focused its efforts on preserving its natural heritage and is setting a new standard in eco-tourism. It is an effort that ensures that local communities who depend on tourism can continue to thrive, and environmentally minded travellers to visit the island with a clear conscience.

The diverse coral reefs that surround Mauritius have become a destination for diving enthusiasts. Shallow lagoons around the island are filled with triggerfish, lobsters, moray eels and large red anemones. The lagoons are the perfect environment for beginner or intermediate divers. More adventurous underwater explorers head to locations like the Caravelle site off Trou aux Biches, where they can see a stunning array of large marine wildlife, from white tip sharks and giant leopard eels to stingrays and turtles.

Mauritius is taking steps to ensure the preservation of these sites, and the reefs are flourishing again after an intense coral planting programme in the area. The conservation efforts in the reef are creating new habitats and ensuring that the reefs remain a destination for divers in the future.

Conservation efforts are also reopening areas of the island to visitors. The Domaine de L’Etoile was recently opened to the public and is one of the most pristinely preserved regions of Mauritius. Visitors can explore 2,000 hectares of unspoilt nature on foot, horseback, or by quad bike, and a 3.5 km zipline also provides spectacular views of the island for thrill-seekers. The Ile aux Aigrettes, a small coralline limestone island off the south-east coast, has also been declared a nature reserve. Visitors can take tours to see the restored dry coastal forest that previously covered most of Mauritius, as well as rare species that were once all but extinct in the area.

One of the island’s biggest conservation success stories is the Vallée de Ferney, a 400-year-old native forest. It is home to the Mauritius kestrel - the only bird of prey remaining on the island. The kestrel is no longer considered one of the world’s rarest birds thanks to efforts to protect the bird and reestablish its habitat. The Mauritian Wildlife Foundation has a strong record in bringing back species from near extinction, and the echo parakeet population is also gaining strength following a dedicated initiative from the 1980s onwards.

The Seven Coloured Earths of Chamarel is a natural phenomenon that’s created a magnificent pattern of colours in the sands thanks to volcanic minerals.

At One with Nature

With its breathtaking scenery, Mauritius is also famed for its relaxing beaches, luxury hotels and spas. The resorts on the island are also championing the conservation efforts with visitors being encouraged to help with the efforts by saving water, reusing towels and choosing glass over plastic, but most of all by choosing one of the Mauritian resorts that have proudly gained their green certifications. New developments on the island are achieving high standards in sustainable design. Hotels are increasingly taking steps towards sustainability by sourcing local produce, making smart use of air-conditioning and pool water, and using non-toxic products that protect the island’s biodiversity.

The Seven Colours Spa at the Heritage Resort in Bel Ombre for example is a purely Mauritian spa, using natural ingredients that reflect the diverse heritage of the island. The same sense of caring can be felt through the entire hotel, which bears the international Green Key sustainability label. On the northeast coast, the Constance hotels Prince Maurice and Belle Mare Plage, both carry the international Green Globe certification. In addition to efforts to save water and energy, recycling and composting, the Constance hotels have taken extra steps to protect local fauna and flora. Mangroves are being planted on the banks, and working alongside wildlife foundations, coral reefs are also being rehabilitated. Guests can get involved with these efforts by planting native plants, or even go out with the teams who protect turtle nesting sites.

Mauritius is a place of wonder, and the work that is going into preserving the island habitats is equally remarkable. As travellers become more aware of their environmental impact, and consider this when choosing holiday destinations, the conservation efforts that Mauritius is making becomes even more important. There are few places in the world that can boast such overwhelming beauty and at the same time show such success in preserving and cultivating it.

Scores injured, 13 critical after storm sweeps across parts of Germany