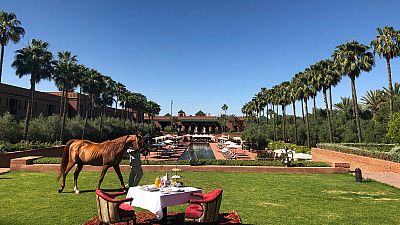 This oasis at the foot of the Atlas Mountains is the result of a Moroccan man's wish for his family to create a project in his hometown.

Saida and Abdeslam Bennani Smires made their grandfather's dream come true — while adding their own passion. This is how the Selman Marrakech palace hotel and stud farm was brought to life. From the concierge to the general manager, everybody here is proud to have hosted celebrities including Tom Cruise, Nicole Kidman, and Leonardo DiCaprio. Yet what makes them even more proud is sharing their culture and traditions, in which a love for hospitality is deeply rooted.

Kamil Ennadifi was here at the beginning. Today he is the general manager but comes across more like a friend. We happened to meet in the middle of the holy month of Ramadan, a tradition I was able to experience closely for the first time. By the end of the evening, he had told me the whole story of the Selman.

That night, just after the sunset, guests gathered around the sumptuous, tented tables in the garden of the Assyl Restaurant (meaning authentic), which were big enough to host 10 friends and relatives. The richly decorated interior had to wait, people who preferred this restaurant to the other one in the hotel, which is more dedicated to French cuisine, had come here to enjoy the evening outside.

Pale light illuminated the long tables that held hummus, couscous, and tagine, and to my surprise, there was even room for a couple of types of sushi as well. My sweet tooth kept taking me back to the dessert table, feigning modesty by selecting only slivers of pies and samples of dried fruits and different kinds of nuts.

As a typical gesture to honour guests in Morocco, everybody is welcome to try the authentic Moroccan mint tea, ceremoniously prepared in the garden. Andalusian musicians play what is known as the Arabic Oud, the grandfather of the guitar, with its 5,000-year-old history. The highlight of every evening here is the horse show. As I sipped the fragrant nectar, local music began to dictate the rhythm, and the darkness unveiled majestic horses, one by one, while mysterious torchlights and palm trees completed the scene.

“The horses represented here are some of the finest thoroughbreds of Morocco having won numerous prizes in international competitions,” Kamil explains.

The spirit of a stallion and the passion of a man

As a collector and an active competitor himself, Abdeslam Bennani Smires put the breeding programme into the heart of this project. The hotel was named after a famous 20th-century horse, named Selman, which was father to a long line of thoroughbreds. The studs were the first thing built and the equine motif is everywhere, from the black and white pictures on the walls to the design of the windows. Though his well-respected family was mainly associated with financial business in Casablanca, Abdeslam turned to the hotel industry and studied in the prestigious Lausanne Hotel School in Switzerland, where he met Kamil.

“At the beginning, there was nothing on this 6 hectares of land but dust,” Kamil recalls. But Abdeslam had clear ideas about what he wanted.

"I saw this young stallion of a man before me,” said renowned French architect and interior designer, Jacques Garcia, when he first met Abdeslam. The designer was inspired instantly and made the first sketches right away, preserving this spirit.

Today, it is more like a private palace rather than a hotel, says Kamil and I cannot disagree. I was in awe at first, taking in the green and purple shades of the lobby, the grey, velvet-like cover of the floor and the paintwork of the walls, which echoed that. The harmony was completed by the carefully placed roses and lighting. I spent what felt like hours admiring the crystal chandelier in the middle of the lobby, wondering if it was the biggest I'd ever seen, until the concierge appeared noiselessly and walked me under the keyhole arches. Everything here is the work of Jacques Garcia and local artisans he invited. The result shows quite a few shades of Moroccan architecture from the atmosphere of the dimly lit gallery — a blend of red velvet and black cedar — to the artistically designed stall outside (the first Jacques Garcia had ever designed). Valuable Moroccan antiques can be spotted all along the hallway and in the two restaurants, a touch added by Saida and Abdeslam's mother Najat Bennani Smires.

Believe it or not, I am not a spa kind of girl. Pure relaxation seems harder to achieve than passing my environmental economics class back in college. The first time I wandered off to the spa, I was actually looking for the potager (yes, there is one). Appearing after a few steps taken in a small palm forest, I found a complete authentic hammam, secluded from the rest of the hotel. Inspired by the Orient, light and shade played on the traditional plasterwork, and the few sun-rays sneaking in from the outskirts made their centre point in the middle, right at the interior pool (big contrast to the exterior pools, being exposed to the sun all day long). Inside, I was whispering the whole time, like in a temple. Not much later I found myself on the table in one of the seven treatment rooms.

The spa is operated by the Swiss wellness resort operator Chenot Group. The programme developed by Henri Chenot combines Chinese and Western medicine and focuses on getting rid of the toxins piled up in the body. He named this method Biontology.

The personalised programme comes with the so-called 'Bio-light' diet, a complimentary fitness programme and many different treatments, such as hydro-aromatherapy and massages that release energy blockages. This last one is executed by "cupping" and I am not going to lie, it can hurt. But whether it was the cupping treatment or the considerate service alongside the comfort of the wooden deck-chair covered with soft pillows, I was soon incredibly relaxed, feeling weightless even.

Rooms parade a palette mainly of soft grey, chocolate brown and gold. The chambers emphasise traditional decoration rather than modern technology. The luxurious environment is always relative though, for example, my room was quite modest compared to the private villas nestling one or two suits and their own 15-metre pools.

The view from my balcony, however, provided much better views that appealed to all the senses. The main pool in the middle dominated this oasis guarded by palm trees and a loud choir of birds. I smelled a sweet fragrance of amber, cedar and vanilla, among others in my room, it appeared to be one of the "secret weapons" of the hotel to stay unique, as the fragrance is made exclusively for them.

Spotting a few horses beyond the turquoise-blue water practising for an upcoming competition is all part of the experience. I have never met a horse whisperer before, but Sadek El Bahjaoui's role seemed to be similar to that of a magician. His horse show is well-known and quite spectacular to watch while having brunch in the pavilion of the hotel. Without giving orders, Fado, a majestic white Arabian barb, reacted to every move of his trainer, dancing, rearing, and eventually sitting down. What struck me the most was their bond, the deep personal connection between Sadek and Fado.

For a famous Moroccan equestrian artist, Sadek is surprisingly buoyant and informal, having his 6-year-old son follow each of his steps. Soon after I met him, I found myself riding Sabah, a Spanish mare, while touring the property. The highlight of the horse-riding? For me, it was when Sabah curtsied — with me on top of her — at the end of our ride.

After three days, I found myself joking with the concierge Abdul as if we were old friends. By the time we were waving goodbye I realised that the award-winning horses and the turquoise water are part of what make this place irresistible. But what will lure me back is the unique hospitality I experienced at the Selman.