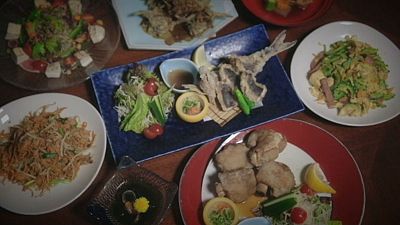 We end our visit to Okinawa, Japan, with a Postcard about the fascinating food there.

This chain of islands has one of the world’s highest populations per capita of people aged over 100, and part of the secret of longevity is said to be the diet.

Euronews’ Seamus Kearney reported: “The cuisine here is less likely to be sushi like in other parts of Japan but lots of pork for example, and vegetables like the famous goya, which is a bitter kind of melon.”

Goya, tofu and pork were on the menu when we arrived in the village of Ogimi, with its high population of centenarians, and where Emiko Kinjo has a restaurant that serves longevity food.

She told Postcards: “I was fascinated by traditional vegetables and really felt the need to make sure the next generation knows about them.

“I opened this restaurant so as to revive these vegetables and make sure they’re not forgotten.”

As we said goodbye, Emiko helped a 99-year-old friend harvest another local longevity treat, a tiny citrus fruit that is said to promote healing and wellness.