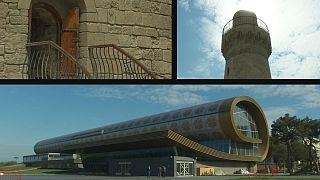 In this edition of Azerbaijan Life we go to the capital of the country, Baku, to see and hear how the city is moving into the future.

Baku is on the western shores of the Caspian Sea. Its heartbeat is the vibrant old city.

Scholars believe the earliest written evidence of Baku dates back to the first century AD. Sieges and battles have raged around its walls since. Baku’s history reflects the changing cultures and architectural styles here at the crossroads between Asia and Europe.

Khanum Babyeva, a guide at the Research and Cultural Centre explained more about the buildings: “Baku is a very, very interesting city because Azerbaijani people call it a city of contrasts. Why a city of contrasts? It’s because of this new construction and the old places. The Maiden’s Tower and then the Palace with the Minaret. Behind me are three beautiful new buildings which are the symbol of modern Baku.”

The iconic flame towers, the facades of which are turned into gigantic display screens at night dominate the city’s skyline. The country’s centuries old carpet making industry is celebrated in a stunning new museum as a traditional craft and culture meets futuristic design which reflects the story of this developing city.

Within the walls of the old city – a UNESCO world heritage site – is what is to date the world’s only private museum of its kind.

Visitors can view over 5,000 published books in miniature, collected from 64 countries many by authors known across the globe.

Zarifa Salakhova the museum owner explained her interest in these tiny books. “Minature books is an art form and the smaller the book the greater the artistic development.”

The old city overlooks the Caspian Sea. All is not well in these waters. The sturgeon fish and country’s world famous wild caviar are under threat. On the Kura River which flows into the Caspian Sea is one example of how Azerbaijan is preparing to protect its industry of caviar and take it into tomorrow’s world with a special and unique ecological farm for sturgeon.

It is one of the oldest families of fish in existence, its caviar eggs renowned and sought after for centuries at tables across the world, but the clock is ticking.

“Sturgeon fish is on the verge of extinction. No more wild caviar if we don’t do something about it now,” said Ahadpur K the man behind the initiative.

Under strict ecological conditions there is a breeding programme in place. Each stage of development of every fish is closely monitored. After five years they are released into the fresh water.

“Caviar fish is like salmon, for example, from whichever river they entered the water when they have caviar they return to the same river to lay eggs,” added Ahadpur K.

It will be the next generation of fish which are being released into these waters which, it is hoped, will return to the same area with their wild caviar. It is a long process – building a sustainable future for the sturgeon of the Caspian Sea will take years.