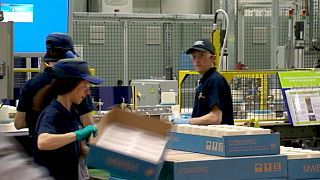 The sight of cranes across the Macedonian sky is a sign of this country’s ongoing transformation after gaining independence 20 years ago.

In the second of a three-part series, euronews looks at what is driving that change and the business challenges ahead.

Like most countries, Macedonians have had to deal with the effects of the global financial crisis.

But the nation’s leaders have voiced optimism, talking about a gradual recovery. Public spending has been greatly increased to try to stimulate the economy.

The Macedonian Finance Minister, Zoran Stavreski, said: “In our budget in 2011 we have increased capital expenditures by 30 percent compared to 2010.

“This is our policy for supporting our domestic industry and construction sector, in order to compensate for the loss of external demand during the crisis and immediately in the post-crisis period.”

The government expects the economy to grow by about three percent of GDP this year.

But emerging from the region’s past turmoil has not been easy for Macedonians.

High economic hopes are riding on the likes of leading Macedonian company Alkaloid, which continues to break into new foreign markets.

It has expanded into a diverse range of activities, from pharmaceuticals and cosmetics to chemical products.

Experts say that increasing the standard of living for Macedonians and getting more people into jobs are top priorities for the future and a robust business community will be crucial for that success.

As well as being a member of the World Trade Organisation, the country is an official candidate to join the European Union.

To put itself on the economic map, regulatory, legal and financial reforms have been crucial. But job creation is still a big challenge.

The focus has turned to education and training, providing the new generation with the right skills required in a competitive global economy.

There is also concern about the loss of talented people heading abroad in search of work.

Prof. Radmil Polenakovik from the Ss. Cyril and Methodius University in Skopje said: “In order to prevent our brain drain – because we have a lot of bright people leaving the country because of the huge unemployment rate – we must focus on self-employment.

“We must focus on entrepreneurship in order to tell our students, the young people, that they must take their destiny in their own hands. I think that is the future of Macedonia.”

While it is hoped that more local companies will continue to emerge and provide jobs for young people, big efforts are also being made to try to attract foreign direct investment.

Special industrial zones have been set up with the offer of incentives such as low taxes, less bureaucracy and easier business regulations.

The Chief Executive of Invest Macedonia, Viktor Mizo, said: “Attracting investment has become a very fierce game, and [there is] competition among many countries, especially in central and eastern Europe.

“What we have to do is compete with the countries; some of them are already members of the EU.

The British company Johnson Matthey, a world leader in emission control technology, is one of the organisations to take advantage of the Macedonian business landscape.

It is producing state-of-the-art catalytic systems in the country.

Local authorities are now crossing their fingers that more foreign companies will also look towards Skopje.