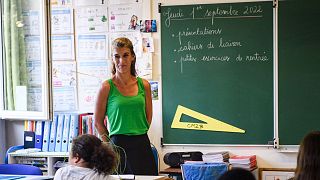 A teacher welcomes pupils in the classroom on the first day of the new academic at "Revolution Jet d'Eau" school in Marseille, southern France, on September 1, 2022.   -   Copyright  Clement MAHOUDEAU / AFP
By Servet Yanatma  •  Updated: 02/02/2023

Teachers are often hailed as heroes that are to be celebrated, but in many countries across Europe, they're feeling undervalued and are even taking to the streets.

Thousands of schools in England and Wales are set to close in February after teachers' unions voted to strike.

In Hungary, thousands of teachers marched in Budapest late last year, calling for higher salaries and urgent reforms from the government following strikes in September. Around 50 teachers have even been fired for "civil disobedience" after staging walkouts.

It's part of a wider picture of malaise in education, with a growing teacher shortage spreading across Europe. In France, there are currently 4,000 vacancies, with the latest estimates in Germany suggesting a shortfall of 25,000 teachers by 2025.

The situation is largely due to working conditions, including stagnant wages that are being exacerbated by the cost of living crisis.

So, how much are teachers paid in Europe? Which countries pay teachers the most and the least? And how much have teacher salaries changed in the last decade?

There are significant differences in teacher salaries across European countries.

The official annual gross starting salaries in public schools in lower secondary education (ISCED 2) ranged from around €4,233 in Albania to €69,076 in Luxembourg in 2020/2021, according to country data compiled by the European Commission/EACEA/Eurydice.

The average pay for teachers across European Union (EU) countries is €25,055.

The annual salary in France and Italy was less than half the German figure.

Bulgaria had the lowest annual starting teacher salary among EU countries, at €7,731. The figure is also below €10,000 in several other EU countries such as Latvia, Slovakia, Hungary, Romania and Poland.

The purchasing power standard (PPS) is “an artificial currency unit” defined by Eurostat, where one PPS unit can theoretically buy the same amount of goods and services in each country. Looking at salaries in PPS irons out some of the cost of living differences between countries, but there are still wide disparities.

Teacher salaries seen through this lens ranged from 7,824 PPS in Albania to 50,357 PPS in Germany. While the annual gross starting salary of teachers is generally between 20,000 and 30,000 PPS, it is still below 20,000 PPS in 10 EU countries: Estonia, Malta, Czechia, Romania, Greece, Bulgaria, Poland, Hungary, Latvia and Slovakia respectively.

The Balkan countries Montenegro and North Macedonia, which are outside the EU, have higher teacher salaries in PPS than several EU countries. Surprisingly, Turkey ranks significantly better in PPS (28,455) than in nominal salary (€8,330): while it ranked 28th out of 36 countries in nominal figures, it came 11th in PPS.

How do European teachers’ salaries compare to the minimum wage?

That ratio is the highest in Germany, with 2.8, whereas Poland has the lowest ratio with 1.1.

The average ratio across 21 EU countries is 1.86 while it is just 1.4 in France and Greece.

In most European countries, teachers who start working in state schools also earn, on average, significantly less than the national gross domestic product (GDP) per capita.

Their annual gross statutory starting salary was higher than the GDP per capita in just seven out of 36 countries. The highest ratio of salary to GDP per capita was recorded in North Macedonia with 1.28, whereas it was the lowest in Ireland with 0.45.

While Germany is one of the countries with the highest GDP per capita in Europe, the ratio is 1.26, meaning that junior teachers still earn more than the average GDP per capita. In contrast, this ratio is just 0.71 in France.

How have teacher salaries changed in the last decade?

The latest Eurydice report also provides figures for the 2009/2010 period. At the time, the annual gross starting salaries of teachers varied from €2,743 in Romania to €63,895 in Luxembourg.

The change in annual gross starting salaries of teachers between 2009/2010 and 2020/2021 was the highest in Lithuania, where wages rose by 269 per cent in those 11 years. Recent EU member states Romania and Bulgaria also saw dramatic increases in teacher salaries over the last decade, of 193 and 180 per cent respectively.

The starting teacher salary also rose by 42 per cent in Germany, which already had the second highest salary in the 2009/2010 period. The change was below 10 per cent in six EU countries - Cyprus, Portugal, Spain, Italy, Slovenia and Luxembourg.

Turkey is the only country on the list where starting teaching salaries decreased over the decade, falling by €876, or 10 per cent, likely due to the collapse of the Turkish lira in recent years.

Starting salaries also rose by more than €10,000 in Austria, Lithuania and Denmark.

Are teachers satisfied with their salaries?

According to the Teaching and Learning International Survey (TALIS) in 2018, on average only 26 per cent of teachers in OECD countries and economies participating in TALIS thought their work was valued by society, and 39 per cent were satisfied with their pay.

How much have countries spent on education?

In 2020, general government expenditure on education in the EU amounted to €671 billion, or 5 per cent of GDP.

The EU countries spending the highest share of GDP on education were Sweden (7 per cent), Belgium and Estonia (6.6 per cent), followed by Denmark (6.4 per cent) in the EU.

Outside of the bloc, Iceland spent 7.7 per cent of its GDP on education. The lowest levels of expenditure on education as a share of GDP were seen in Ireland (3.1 per cent), Romania (3.7 per cent), and Bulgaria (4 per cent).

How many pupils do teachers look after?

In the EU, the average number of pupils per teacher at primary level was 13.6 in 2020 but once again, there are significant country-by-country variations.

A worrying shortage of teachers

Last but not least, there is a worrying shortage of teachers in European countries.

More than 30,000 teacher positions remained unfilled in Germany at the beginning of this academic year.