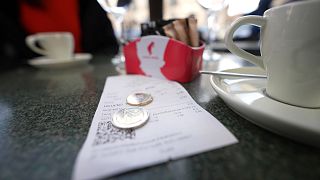 On the first of January 2023, Croatia became the 20th country to join the eurozone. The kuna, the local currency, has been replaced by the euro.

With the single currency, the country hopes to make its economy stronger and more stable, and to improve the standard of living of its inhabitants.

Some regret passing of the kuna

At the fruit and veg market in Zagreb, reactions are mixed.

"I'm happy with the change," says one shopper. "It's something new."

"It's not true prices have skyrocketed," says another. "Maybe they're up a few cents, but that's nothing."

Coffee, bread… the prices are higher now than before the new year and people don’t have much money to spend.

Others are less convinced.

"Prices are a bit too high, that's all," says an older man. "I don't have a problem converting. You just need to have money!"

"We're not happy, we prefer our little kuna," another says. "To me, a country that does not have its own currency isn't a country."

A majority in favour of the switch

45% of Croatians already had a euro account for big expenses, but all now have to get used to the single currency for everyday purchases.

Ana Knežević is president of the Croatian Association for Consumers Protection.

"For the old people, it is difficult to count how much it is now when the prices are in euros. We have double prices so it is very easy to compare," she says.

While older people are attached to the kuna, 55% of Croatians do favour adopting the euro, according to the Eurobarometer. But more than 80% of them fear a rise in prices.

"Coffee, bread… the prices are higher now than before the new year," she continues. "People don’t have much money to spend, food is very expensive, heating, electricity is also expensive, so it is very difficult to live. Croatia is a small country, pensions are not high so you can imagine how they live."

Boost for tourism and manufacturing

The switch to the euro and the entry into the Schengen area are expected to boost sectors such as tourism, 24% of Croatia's GDP, but also manufacturing, which at over 12% of GDP is an important export sector.

Končar Group works in the fields of energy, infrastructure and electric railway vehicles. The company exports more than 60% of its production, of which 70% goes to countries in the eurozone.

"If we look back in the last 21 years when we actually tied our currency, kuna, with euro, we cannot say that the change will be tremendous," says CEO Gordan Kolak. "But we think the operation of the business will be much easier because our customers would easily understand our offers.

Adopting the euro seems natural for a country where the single currency is already well integrated.

Interview: Governor of the Central Bank of Croatia Boris Vujcic

We spoke to the Governor of the Central Bank of Croatia Boris Vujcic to get his views on the arrival of the euro.

Boris Vujcic, Governor of the Central Bank of Croatia : I'm happy that we completed a project which we started five years ago, basically. This is something which will bring more resilience to the economy. It will make the Croatian economy more attractive for foreign direct investment. Transaction costs will be lower. It's also important because we are a tourist country and as a tourist country, 70% of our tourists come from the eurozone countries. So in many ways, it's a good thing for Croatia.

Fanny Gauret, Euronews: So given the current inflation in the eurozone, do you think it's a good time to switch to the euro?

Boris Vujcic: I think that if we could have switched earlier, it would have been better. For a small, open economy like Croatia, it is particularly important to be in the eurozone during times of crisis. If you look at some of our neighbours who are members of the European Union and not members of the eurozone at the moment, they had quite a lot of pressure in the foreign exchange market this year after the aggression on Ukraine. So if you look at the cost of borrowing, these costs are now between for the companies between 8% and 11% or for the household, 6 to 9%. While in Croatia, we didn't see any pressure in the foreign exchange market, nor we did have to react with the increase in the interest rates as much, as was the case in those countries. So at the moment already we see the benefits because the markets have priced in that we will get into the eurozone at the beginning of this year.

We have to now focus on doing the kind of structural reforms that we still need to do, with the help of a better economic environment created by the euro entry and the Schengen space entry.

Fanny Gauret: So how about giving up the ability to set your own interest rates?

Fanny Gauret: What are the challenges of getting large amounts of money into the Croatian economy, like, for instance, the real estate market?

Boris Vujcic: We don't see anything in terms of the overheating of the economy. What we do see is that, as you rightly say, the real estate market is hot, the prices are going up now. I think that next year, with interest rates going up, we will see the cooling of the real estate sector. The one thing that will not change is foreign demand, which is expected actually to increase. We now see approximately 20% of the real estate purchases coming from abroad, we’ll become even more attractive.

Fanny Gauret: So on a final note, what are the challenges ahead?

Boris Vujcic: I think it's not the magic thing that will solve the structural economic issues that we have. And we have to now focus on doing the kind of structural reforms that we still need to do, with the help of a better economic environment created by the euro entry and the Schengen space entry.

What challenges will the next generation face?