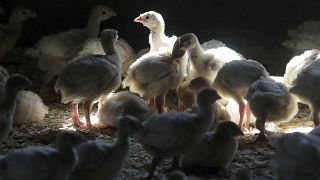 Millions of birds have been killed by the virus in the last year, and millions more have been forced indoors to avoid contagion.   -  Copyright  Charlie Neibergall/AP
By Giulia Carbonaro  •  Updated: 10/01/2023

History's worst outbreak of avian flu in wild birds is wreaking havoc across the world, forcing millions of poultry to be put under lockdown and be kept indoors (goodbye, free-range eggs) and leading to the culling of thousands of birds.

While the virus has an absolutely devastating impact on birdlife, due to its high transmissibility and lethality, the spread of avian flu is also potentially concerning for humans.

In a very concrete way, the spread of what scientists have confirmed is the world's worst bird flu - which has now been unfolding for over a year - is already affecting us.

The disease is one of the contributing factors making both poultry meat and eggs more expensive, together with the lingering impact of COVID-related disruptions and the Russian invasion of Ukraine.

Overall, the outbreak is exacerbating the cost of living crisis, disrupting food supply chains and forcing the culling of millions of poultry destined to end up on the shelves of our grocery retailers.

Is bird flu getting worse?

One of the biggest concerns for humans is also that the rampaging bird flu could enter territories previously uncharted - including mutating into the next pandemic.

"At the moment, the situation is unprecedented. Last winter we had the worst outbreak of highly pathogenic avian influenza in the UK. This year is on track to equal or beat that", Professor Paul Digard, Chair of Virology at the University of Edinburgh, told Euronews Next.

"The other thing that's changed is that normally, in northern Europe and the UK, we get sporadic incursions of high pathogenic avian flu in the winter, but then they disappear over the summer. Last summer, it never entirely went away, it died down quite a lot, but it never fully went away. So the virus has changed its behaviour in ways that we've not seen before in this part of the world".

While the bird flu - or highly pathogenic avian influenza, to be exact - has been around for at least 200 years and probably more, said Digard, outbreaks have become more common. The current strain circulating is known as H5N1.

"The numbers [of outbreaks] have picked up since the 1980s, and then everything changed in 1996-97 when the ancestor of the current virus appeared in Hong Kong", Digard said.

"And that virus was different from all the previous ones in that it could survive in wild birds as a sort of a long-term infection, and that gave it the ability to spread around the world so that that virus or descendants of it have been with us for the last 25 years.

"And the number of outbreaks of that lineage of the virus has been very large indeed. The numbers are higher than they've been in the past. That's probably fair to say".

What's the risk to humans?

"There is a risk to human health, but at the moment I would say it's low", said Digard.

During the 1997 outbreak, 18 people got infected with bird flu, and six died.

"It was a rare infection in humans, but when it did happen, it had roughly a 50 per cent case fatality rate", said Digard.

Until at least the early to mid-2010s, the situation stayed the same, said Digard, with very rare cases of human infections but causing severe illness in those who contracted the virus.

"Since then the virus has changed, and from the human perspective, it has changed for the better", said Digard. "It seems to be causing far fewer human infections, and when it does infect people it seems to cause milder disease in most people".

So, the risk to human health is lower than it has been in the past, and there's no need to panic.

"This lineage of the virus has been with us for 25 years and in that time, although it's been able to infect people, it's never shown any signs of really evolving the ability to transmit from person to person, which is what you would need for a major outbreak in humans", said Digard.

But chances are that the virus might change in the future.

"You can't say it will never adapt, it'll never change in a way that will cause the next pandemic, but I think it’s very low-risk at the moment", he continued.

"I don't think it's low-risk that we'll get another flu pandemic; I think that's the case of when not if. But my guess would be it's not going to be this strain. It'll be something else that catches us by surprise".

After the outbreak of COVID-19, which is believed to have spilled over from a yet unidentified animal into humans, experts warn that the next pandemic will likely come from another zoonotic disease like coronavirus.

"This is a problem that's grown over the years. But we have become better able to try and head off some of these problems," said Digard.

We have found a way to create vaccines against the flu - including the H5 virus strain - and we are able to produce them on a large scale.

In this context, the way we farm animals for the meat and dairy market is of crucial importance to avoid virus spillovers.

"We can change your security procedures, you can change the way you design farms to reduce the chance of those transmission events happening in the first place".