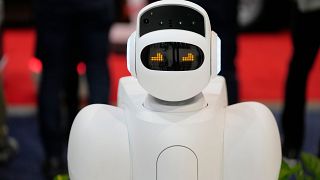 This week, Euronews Next is at CES (formerly known as the Consumer Electronics Show) in Las Vegas, one of the most important tech events in the calendar.

Here are some of the best innovations that have caught our attention so far.

BMW unveils updates to its car-mechameleon

BMW is back at CES this year with its latest colour-changing concept car.

Following last year’s event where the carmaker unveiled its colour-shifting iX Flow, the i Vision Dee is a medium-sized sedan, and enables its owner to either switch between - or combine - 32 different colours. It will be on the market for consumers from 2025.

VW is going grill-to-grill with Tesla

The newest electric model from VW positions itself on the same track as Tesla’s model 3 or the Polestar 2.

Its USP is its claim that it offers one of the longest single-charge ranges in the industry, promising up to 700 km.

“When cars can fly”

Well, it’s happened - a car that can rack up air miles. Roughly the size of an SUV, the ASKA A5 is a four-seater electric vehicle that its creators say can travel by road and up to 400 km by air on a single charge.

When it enters flying mode, the vehicle's wings and six roots unfold, allowing the vehicle to take off vertically or do conventional runway takeoffs.

As well as helping care for the unwell and elderly, for example by sending an alert if someone is in difficulty, the robot will also roll around healthcare centres disinfecting surfaces and delivering medicine.

Forget ASMR - all you need is this calming pillow

The soft, fluffy pillow gently expands and contracts, vibrating as you hold it against your stomach. The idea is that you'll breathe more slowly and deeply as your breath starts to synch with the movement of the pillow.

The FRENZ Brainband by Earable Neuroscience is designed to help you sleep better at night, wake you up at the best time so you don’t feel groggy, and help you focus during the day.

If you want a treadmill but don't have much space, WalkingPad offers a solution: a lightweight treadmill that can be folded in two and stored against a wall or under a bed.

WalkingPad reaches speeds of 7.5 mph (12 km/h). It also includes a detachable phone or tablet holder and tracks your exercises in an app.

Special software assesses your specific requirements and the finished product is a bespoke supplement for you.

Android has joined Apple in the satellite-based texting future

The feature could come in handy for those who need to communicate but don't have coverage.

The metaverse, of course, is a key theme at CES this year.

One tool that’s going down especially well is the Mutalk, a voice-dampening device that the user covers their mouth with and opens a wealth of opportunities for party people who want to avoid riling their neighbours with late-night karaoke sessions.

Given the number of new devices displayed at this year’s event, the future of childcare is becoming clearer.

As well as AI baby monitors that keep watch over babies and toddlers, Canadian startup Gluxkind's ‘smart stroller’ helps propel prams up hills and will even roll in front of exhausted parents without them having to do any of the legwork.

Talk to the animals

You might have seen viral TikToks of dogs using button mats to communicate with their owners.

FluentPet is the latest breakthrough on the market, with its hexagon-shaped plastic mat featuring buttons you can train your dog to use to indicate whether it’s hungry, wants to go outside or wants to play.

Or simply get yourself a robot dog

For the ‘90s babies who remember Teksta, prepare to level up. Toymaker WowWee’s Dog-E has more than a million possible combinations of lights, sounds and personality traits.

Dog-E begins as a blank canvas and develops its personality as you set it up.

The developers say it’s a good option for those who can’t commit to owning a real pup, or perhaps for those with allergies.

How are start-ups helping to reduce food waste?

Could this 'brain band' improve your sleep, focus and relaxation?