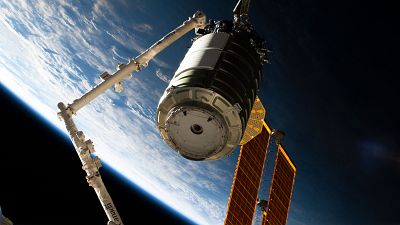 Scott Kelly, a former commander of the International Space Station (ISS), says he doesn’t see any potential for space cooperation between the United States and Russia in the near future, aside from “practical” considerations to keep the ISS in orbit.

The retired NASA astronaut, who famously spent almost an entire year in space alongside a Russian cosmonaut, told Euronews Next that pragmatism meant Russia was unlikely to pull out of the ISS any time soon, despite repeated threats to do so.

Those threats have come amid the ongoing deterioration of relations between Moscow and the West over Russia’s war in Ukraine.

“In the absence of regime change in Russia and a completely different government that operates more within the bounds of international law, I don't see a future for any kind of cooperation with the Russian space programme beyond the International Space Station,” Kelly said.

The ISS stands as one of the few remaining areas where Russia still cooperates with Western countries, and both Russian and NASA expertise is currently required for the successful operation of the station.

Russia will continue on the ISS, Kelly added, because it lends President Vladimir Putin “credibility with nations he wants to be aligned with”.

“Basically to be able to say, 'well, I can't be all that bad because the Americans are still participating with me on the space station'”.

Kelly also revealed that friends of his within the Russian space programme, including current and former cosmonauts, felt embarrassed and ashamed of Russia’s war.

He was speaking out following the announcement that he is raising funds for ambulances in Ukraine, a country he has shown steadfast support for, as it defends itself against Russia’s invasion.

“Anyone that believes in freedom and democracy, I think needs to be standing with Ukraine, because if Russia gets away with invading a European country, why would they stop there?” he told Euronews Next.

“I hope that people will come on board and help raise money because Russia's destroying 10 ambulances a week. And these save people's lives, innocent people.”

In July, Russia claimed it was going to quit the ISS after 2024, with the new director-general of Roscosmos, Yuri Borisov, announcing Russia would work on building its own space station.

Borisov went on to call the ISS “dangerous” and unfit for purpose, claiming “an avalanche-like process of equipment failure is beginning, cracks are appearing”.

Scott Kelly finds this threat to quit by 2024 - which Russia has now rowed back on - “humorous”.

“I don't believe they would ever leave, unless they had no choice, like unless they could not afford to launch another rocket to fly their crews up there, which might actually be a possibility actually at some point,” he said.

“I think if they have the means to stay, they'll stay. But if they were to leave or if we were to try to force them to leave, it would be a challenge to operate the space station without Russia's involvement. Not impossible, but definitely challenging”.

The ISS was launched in 1998, and has been continuously occupied since 2000 under a US-Russian-led partnership. NASA wants to keep it operational until at least 2030.

Borisov has since said Russia will likely continue its participation on the ISS until 2028.

This summer, amid Russia’s ongoing invasion of Ukraine, NASA and Roscosmos signed an agreement to share astronaut and cosmonaut flights to the ISS on each other’s rockets, ensuring the station will have at least one American and one Russian on board to keep it running smoothly.

In October, cosmonaut Anna Kikina blasted off to the ISS alongside NASA astronauts on a SpaceX rocket as part of this seat-swap deal - the first time in 20 years a Russian was launched from US soil.

Asked whether the ISS stands as a symbol of continued cooperation between Russia and the West, Kelly said: “I think really what it is, is just NASA being very, very practical”.

“If the Soyuz goes down, we can fly Russians on SpaceX. If SpaceX goes down, we could fly Americans on the Soyuz. So that's the only reason it was done. I think it's bad optics, but they're kind of in a tough spot with launch and landing redundancy, as well as how the systems rely on each other on board,” he said.

‘They are very much ashamed’

Kelly has spent a lot of time working with Russian colleagues on space missions. He was flown to the ISS twice on Russian Soyuz rockets, and took part in an almost year-long mission to the ISS with Russian cosmonaut Mikhail Kornienko in 2015-2016.

He told Euronews Next that among his friends are former and current cosmonauts, and people working in the Russian space programme, as well as Russian friends who are not involved with the space programme.

“At least the people I know that I've talked to, most of them feel exactly the same way I do about this, with one addition, I would say, and that is embarrassment”.

“They feel that this is disgusting, immoral, and illegal. They can't believe this is happening. And they are also very much ashamed”.

But he also said he had spoken to some people he was involved with on missions who “believe that Russia had no choice to invade Ukraine because they are defending defending themselves from the Nazis and NATO”.

Aside from fundraising for ambulances in Ukraine, Kelly is getting to work on another high-profile project - investigating UFOs.

He sits on the newly-formed panel of NASA’s investigation into so-called UAPs (unidentified aerial phenomena), which the space agency defines as “observations of events in the sky that cannot be identified as aircraft or as known natural phenomena”.

The study, lasting nine months, will lay out a roadmap for future UAP data analysis by NASA.

“I think I would love for an alien spacecraft to visit our planet, it would be really cool,” said Kelly.

“The panel is going to look at whatever unclassified information there is and then decide what other information we would need to really nail down what these UAPs are.”

He explained there would be public hearings and meetings, but in terms of what these sightings might be, he reserved his judgement “until we have more information”.

Before becoming an astronaut, Kelly served as a pilot in the US Navy, racking up more than 3,500 hours in the sky - and while he saw some strange things personally, they always turned out to have a logical explanation.

“When you're flying aeroplanes, especially around the water, there are a lot of opportunities for optical illusions, and in space it’s the exact same way. I don't know how many times I saw something in space that I was like, ‘wow, that's not moving like you would expect a satellite or a planet to look’”.

“You get all excited and then, you know, you watch it for a little bit and then you realise it's the lensing from the atmosphere again”.

He said that every single time he saw something that looked strange, it turned out to be an optical illusion caused by a satellite moving behind the Earth’s atmosphere.

Fighting from my living room: How one volunteer hacker helped Ukraine