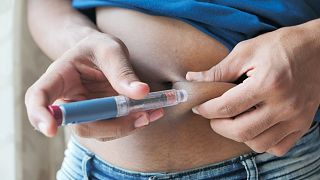 Off-label prescriptions of several antidiabetic drugs led to a shortage in Australia and tensions in other contries.   -   Copyright  Canva
By Oceane Duboust  & Natalie Huet  •  Updated: 01/01/2023

Produced by the Danish company Novo Nordisk, Ozempic is an injectable drug that regulates blood sugar levels and insulin. It’s usually prescribed to adults suffering from Type 2 diabetes, the most common type of diabetes.

But the drug’s active ingredient, semaglutide, also mimics a hormone called glucagon-like peptide-1 (GLP-1) that targets areas of the brain that regulate appetite and food. Because it makes users feel full faster, it can lead them to lose weight.

As a result, Ozempic has been touted on the Internet as a miracle diet drug. On TikTok, the hashtag #Ozempic already has over 360 million views and counting.

Even Twitter's new boss, the billionaire Elon Musk, has credited Ozempic - alongside a similar drug, Wegovy - as one of the reasons he shed 13 kg.

On Facebook, groups dedicated to the use of Ozempic for weight loss have tens of thousands of followers.

The global spike in demand has already caused a shortage of Ozempic in Australia that is expected to last until the end of March 2023.

Australian authorities have called on health professionals to stop initiating new prescriptions of Ozempic and to contact diabetic patients affected by the shortage to switch them to alternative treatments.

France's national drug safety agency issued similar instructions in September when it urged doctors to only initiate new GLP-1 drug prescriptions for patients with Type 2 diabetes with a history of stroke or heart disease.

Authorities in the UK and Australia have also issued warnings to influencers promoting these drugs online. In France, pharmaceutical advertising to the general public is a highly regulated practice, which requires prior authorisation and is reserved for medicines that are not reimbursed by the public health insurance system.

In an emailed statement, Novo Nordisk said it was taking the shortages seriously and had invested $1.6 billion (€1.5 billion) in 2022 alone to expand its production capacity. The company's global manufacturing facilities are operating 24/7 to catch up with "stronger than anticipated" demand, it said.

"We are committed to working closely with authorities in affected markets to minimise the impact on patients and we are doing everything we can to be able to meet demand as fast as possible".

What are the health risks?

The shortage has consequences not only for patients with diabetes who need to follow their treatment on a daily basis but also for the people who are turning to these drugs exclusively for weight loss.

"It can be mild digestive side effects, sometimes severe constipation and inflammation of the pancreas. In rare cases, this can lead to cancer," François Montastruc, a pharmacologist at the Toulouse University Hospital (Haute-Garonne), told the French TV channel France 3.

The instructions for Ozempic published by the European Medicines Agency state that nausea, diarrhoea and hypoglycaemia are "very common" side effects. Like all medicines, Ozempic also has contraindications that a doctor should take into account when prescribing it.

Prescription guidelines vary from country to country, but Ozempic has not been extensively studied for use in patients without diabetes or excess weight.

The rampant off-label use of a diabetes drug brings back memories of the Mediator scandal in France. The drug was widely prescribed as an appetite suppressant and for weight loss until it was linked to fatal heart problems and pulled from the French market in 2009.

Ozempic was not licensed for weight loss, but in 2021 the FDA approved semaglutide, its active ingredient, under the brand name Wegovy for chronic weight management in adults with obesity or overweight with at least one related condition - such as high blood pressure, Type 2 diabetes, or high cholesterol.

Regarding Ozempic, the US National Library of Medicine warns that the injectable drug “may increase the risk that you will develop tumors of the thyroid gland, including medullary thyroid carcinoma (MTC) which is a type of thyroid cancer. Laboratory animals who were given semaglutide developed tumours, but it is not known if this medication increases the risk of tumours in humans”.

In its statement to Euronews Next, Novo Nordisk said "it adheres to high ethical standards as well as all regulations and does not promote or prompt any off-label promotions of its products". It said it was up to doctors to choose the best treatment approach for their patients.

The drugmaker added that its GLP-1 medicines had been on the market for more than 10 years and "to date, the safety data from trials and post-marketing safety surveillance have not identified any risks that outweigh the benefit of treatment".

It’s not the first time that a drug has been diverted from its intended purpose to be used for aesthetic reasons.

In 2021, a BBC documentary warned about the dangerous use of the medicated syrup apetamin by female influencers, this time to gain weight quickly and achieve an extreme hourglass figure. The drug, which is not approved in France or the UK, can cause drowsiness and in severe cases can lead to liver failure or even comas.

A number of beauty “tricks” involving unlicensed drugs or off-label uses have come under fire in recent years. In a 2017 article on The Conversation, two French researchers warned about the use of Homeoplasmine, a medicated ointment containing boric acid that beauty pundits have touted as a moisturising balm, particularly for the lips.

Using anti-haemorrhoid creams to supposedly reduce puffiness and bags under the eyes has also made headlines. These creams typically contain hydrocortisone and are not suited for the thin, fragile skin around the eyes.

In general, health authorities recommend that products from the medicine cabinet should be used with caution and under the advice of a health professional.

Are scientists closer to bottling the benefits of exercise in a pill?