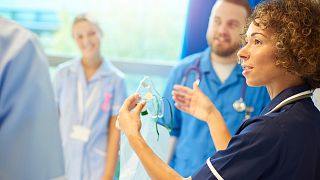 Salary and inflation figures suggest that this should not be a surprise. Annual gross salaries of hospital nurses in the UK increased by 10 per cent in nominal terms but fell by 6 per cent in real terms between 2010 and 2019 according to a dataset released by the Organisation for Economic Co-operation and Development (OECD).

The UK is not the only country in which health workers went on strike in 2022.

In Spain, thousands of health personnel, including doctors working in emergency services, were on strike in November. Besides a considerable increase in their wages, they requested more staff and more resources.

In France, health workers joined protests in several cities in June with similar demands. Doctors in Germany went on strike in March.

In Turkey, health personnel went on strike for better payment and work conditions in March. They also took to the streets in several Turkish cities in July to call for more action to prevent violence after a cardiologist was shot dead by a patient’s relative.

According to the Turkish Medical Association, thousands of Turkish doctors have left their posts to work abroad over the past decade. They mostly prefer to move to Western countries, especially Germany.

How much are nurses paid in Europe? Which countries pay nurses the most and the least, and how much have nurses’ salaries changed in the last decade?

There are significant differences in nurses’ salaries across Europe.

In 2020 or the closest year with available data, official annual gross salaries in hospitals ranged from about €11,880 in Lithuania to €101,151 in Luxembourg, according to the OECD. The dataset includes 25 European countries.

The ranking changes when we look at salaries in terms of purchasing power parity (PPP). PPP is an indicator of price level differences. In other words, it reveals how many currency units a particular quantity of goods or services costs in different countries.

The use of PPP can “eliminate the effect of price level differences across countries,” according to Eurostat as it can be used as a currency conversion rate of sorts to convert expenditures expressed in national currencies into an artificial common currency.

In 2020, nurses’ PPP-based salaries ranged from €18,700 in Lithuania to €66,800 in Luxembourg. The average among 20 EU countries was €35,300. While the gaps in PPP between countries are narrower compared to the differences in nominal salaries, they still vary significantly.

Remarkably, Turkey (€31,700) had a higher PPP-based salary for nurses than several EU countries such as Finland, Italy, and Greece.

Nurses are paid less than the average wage in France

The ratio of nurses’ salaries to average wages in each county is also a useful indicator. The average wage in a country is based on the total wages paid and the average number of employees in the total economy.

In 2020, the ratio of a nurse’s salary to the average wage varied from 0.88 in Lithuania to 1.58 in Belgium. This means that nurses in Belgium earn 1.58 times more than the average wage in the country. This ratio was 1.2 on average for 20 EU countries.

In Finland, Latvia, France, Switzerland, and Lithuania, nurses are paid less than the country’s average wage. The ratio of a nurse’s salary to the average wage was 0.91 in France and 0.88 in Switzerland. Ratios were higher in Spain (1.5), the Czech Republic (1.42), and Poland (1.36).

How have nurses' salaries changed in the last decade?

The nominal change in annual gross salaries of nurses between 2010 and 2020 was highest in Iceland, where wages rose by 123 per cent in the last decade. Nominal change refers to values obtained when inflation is not taken into account.

Some EU member states, such as Hungary (104 per cent), Estonia (94 per cent), the Czech Republic (92 per cent), and Slovakia (91 per cent), also saw dramatic increases in this period.

Nurses’ salaries fell in three European countries between 2010 and 2020: Norway (1 per cent), Italy (4 per cent), and Greece (16 per cent). In Norway, the decrease was caused by changes in the exchange rate.

Change in real terms: Decline in the UK and stagnation in France

Change in real terms is more meaningful as it takes inflation into account. Among nine selected countries, salaries increased in seven countries in real terms between 2010 and 2020 (Hungary, Slovakia, Poland, the Czech Republic, the Netherlands, Spain, and Belgium). However, they declined by 6 per cent in the UK in this period (2010-2019) and did not change in France.

A closer look at the UK

Annual gross salaries of nurses in the UK: Nominal salary and salary in real terms

This figure reveals that annual gross salaries of hospital nurses in the UK increased by 10 per cent in nominal terms but fell by 6 per cent in real terms between 2010 and 2019.

‘Run into the ground’: How did Britain's NHS end up on life support?

As COVID cases soar in China, so does the risk of a new variant

Who could replace Elon Musk as the next Twitter CEO?