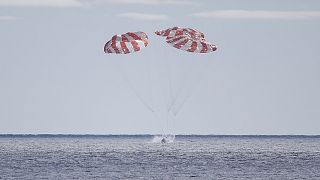 The Orion capsule is seen Sunday, December 11, 2022, parachuting into the Pacific off Mexico to conclude a dramatic 25-day test flight.   -   Copyright  Caroline Brehman/Pool Photo via AP
By Euronews and AP  •  Updated: 12/12/2022

NASA’s Orion capsule made a blisteringly fast return from the Moon on Sunday, parachuting into the Pacific Ocean off the coast of Mexico to conclude a test flight that should clear the way for astronauts on the next lunar flyby.

The incoming capsule hit the atmosphere at Mach 32, or 32 times the speed of sound, and endured reentry temperatures of 2,760 degrees Celsius before splashing down west of Baja California near Guadalupe Island.

A US Navy ship quickly moved in to recover the spacecraft and its silent occupants — three test dummies rigged with vibration sensors and radiation monitors.

NASA hailed the descent and splashdown as close to perfect, as congratulations poured in from Washington DC.

"I'm overwhelmed," NASA Administrator Bill Nelson said from Mission Control in Houston. "This is an extraordinary day... It's historic because we are now going back into space - deep space - with a new generation".

The space agency needed a successful splashdown to stay on track for the next Orion flight around the Moon, targeted for 2024 with four astronauts who will be revealed early next year.

That would be followed by a two-person lunar landing as early as 2025 and, ultimately, a sustainable moon base. The long-term plan would be to launch a Mars expedition by the late 2030s.

Astronauts last landed on the Moon 50 years ago. After touching down on December 11, 1972, Apollo 17′s Eugene Cernan and Harrison Schmitt spent three days exploring the valley of Taurus-Littrow, the longest stay of the Apollo era.

They were the last of the 12 moonwalkers.

Orion was the first capsule to visit the Moon since then, launching on NASA’s new mega Moon rocket from Kennedy Space Center on November 16. It was the first flight of NASA’s new Artemis Moon programme, named after Apollo’s mythological twin sister.

"From Tranquility Base to Taurus-Littrow to the tranquil waters of the Pacific, the latest chapter of NASA’s journey to the moon comes to a close. Orion back on Earth," announced Mission Control commentator Rob Navias.

From Tranquility Base to Taurus-Littrow to the tranquil waters of the Pacific, the latest chapter of NASA’s journey to the moon comes to a close. Orion back on Earth.

While no one was on the $4 billion (€XX) test flight, NASA managers were thrilled to pull off the dress rehearsal, especially after so many years of flight delays and busted budgets. Fuel leaks and hurricanes conspired for additional postponements in late summer and fall.

In an Apollo throwback, NASA held a splashdown party at Houston’s Johnson Space Center on Sunday, with employees and their families gathering to watch the broadcast of Orion’s homecoming. Next door, the visitor center threw a bash for the public.

Getting Orion back intact after the 25-day flight was NASA’s top objective. With a return speed of 25,000 mph (40,000 kph) — considerably faster than coming in from low-Earth orbit - the capsule used a new, advanced heat shield never tested before in spaceflight. To reduce the gravity or G loads, it dipped into the atmosphere and briefly skipped out, also helping to pinpoint the splashdown area.

All that unfolded in spectacular fashion, officials noted, allowing for Orion’s safe return.

"I don't think any one of us could have imagined a mission this successful," said mission manager Mike Sarafin.

Further inspections will be conducted once Orion is back at Kennedy at the end of the month.

If the capsule checks find nothing amiss, NASA will announce the first lunar crew in early 2023, picking from among the 42 active US astronauts stationed at Houston’s Johnson Space Center.

"People are anxious, we know that," Vanessa Wyche, Johnson's director, told reporters. Added Nelson: "The American people, just like (with) the original seven astronauts in the Mercury days, are going to want to know about these astronauts".

The capsule splashed down more than 482 km south of the original target zone. Forecasts calling for choppy seas and high winds off the southern California coast prompted NASA to switch the location.

Orion logged 2.25 million km as it zoomed to the moon and then entered a wide, swooping orbit for nearly a week before heading home.

Orion beamed back stunning photos of not only the grey, pitted moon, but also the home planet. As a parting shot, the capsule revealed a crescent Earth - Earthrise - that left the mission team speechless.

"This was the nail-biting end of an amazing and important journey for NASA’s Orion spacecraft," Brown said in a statement from England.

Trying to reach the Moon again is high on the agenda, not just for NASA but private entreprise. Just hours earlier Sunday, a spacecraft rocketed toward the moon from Cape Canaveral. The lunar lander belongs to ispace, a Tokyo company intent on developing an economy up there. Two US companies, meanwhile, have lunar landers launching early next year.