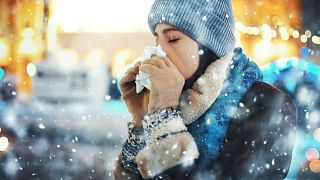 Should we be wearing balaclavas? Scientists have finally uncovered how our noses’ immune response weakens when temperatures drop.   -   Copyright  Canva
By Natalie Huet  with AFP  •  Updated: 07/12/2022

We know that the winter comes hand in hand with a spike in common colds and other respiratory infections.

That’s in part because we spend more time indoors with other people, and viruses survive better in that drier air. But whether the season’s chilly and damp weather may actually weaken our immune systems was less certain.

Scientists have now uncovered how the immune system inside our noses attacks viral intruders - and how this defence mechanism works better when it's warm.

The researchers say the findings, published in The Journal of Allergy and Clinical Immunology, could help develop future treatments against the common cold and other viral diseases such as COVID-19.

"There's never been a convincing reason why you have this very clear increase in viral infectivity in the cold months," study co-author Benjamin Bleier, a surgeon at Harvard Medical School and Massachusetts Eye and Ear in Boston, the US, said in a statement.

"This is the first quantitative and biologically plausible explanation that has been developed".

Previous research from the team had found that when we breathe, cells inside our nose release tiny particles called extracellular vesicles (EVs) that swarm, bind and kill bacteria - just like hornets would swarm you if you attacked their nest.

For their latest study, the researchers set out to answer two questions: is this immune response in the nose also triggered by viruses, and do lower temperatures affect its strength?

In both cases, the answer was yes.

The scientists took nasal samples from volunteers and cultured one batch in their lab at the normal body temperature of 37C, and another batch at 32C – because that’s how low the temperature inside our noses typically drops when we’re outdoors in frigid weather.

Under normal body-heat conditions, the extracellular vesicles – the tiny “hornets” in our noses – were successfully deployed and served as “decoys” that viruses would latch onto instead of the cells they would otherwise target.

“Those extracellular vesicles actually bind to the viruses, which are suspended in the nasal mucus,” said the study’s lead author Di Huang.

In colder temperatures, on the other hand, this defence system wavered: fewer of these vesicles were produced, and they packed less punch against the winter viruses assailing them - in this case, two rhinoviruses and a coronavirus (that was not COVID-19).

In 2015, a team at Yale University found that the rhinovirus (which causes most common colds) can spread more efficiently in the cooler temperature found inside the nose than at core body temperature.

Research from the US National Institutes of Health has also shown that flu viruses are better at spreading in chilly climates.

Mansoor Amiji, a pharmaceutical sciences professor at Boston’s Northeastern University, who co-led the latest study, expects the nose’s innate response to pathogens could be tested against a wide range of viruses.

The research could pave the way to new therapeutic options harnessing the nose’s response system to fend off the common cold, or even flu and COVID-19, he added.

“Can you create artificial virus sponges – a decoy cell – that the virus can bind to? And now you have an antiviral compound that destroys it before it infects the actual cell,” he said.

Extreme temperatures increase the risk of dying from heart diseases