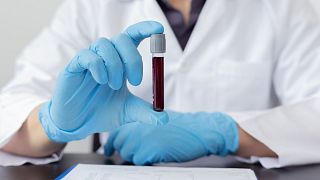 A new blood test could detect signs of Alzheimer’s years before symptoms emerge, which could help identify people at risk of developing the disease and aid in the development of future treatments.

Alzheimer’s, the leading cause of dementia, is currently diagnosed in most cases once the patient has a symptom, such as memory loss.

At that point, the best treatment options available can only slow down the progression of symptoms.

Research has shown the suspected cause of Alzheimer’s - a buildup of proteins in the brain - can begin years, or even decades, before the onset of symptoms showing cognitive impairment.

These proteins, called amyloid beta proteins, clump together to form what are called oligomers, leading to Alzheimer’s in a process scientists are still trying to understand.

A new blood test, developed by researchers at the University of Washington, measures these levels of amyloid beta protein oligomers in blood samples.

Publishing their findings in the Proceedings of the National Academy of Sciences, the researchers demonstrated how the test could detect the oligomers in the blood of patients with Alzheimer’s disease, but not in most members of a control group who had no signs of cognitive impairment when the blood samples were taken.

“What clinicians and researchers have wanted is a reliable diagnostic test for Alzheimer’s disease - and not just an assay that confirms a diagnosis of Alzheimer’s, but one that can also detect signs of the disease before cognitive impairment happens,” said senior author Valerie Daggett, a UW professor of bioengineering and faculty member in the UW Molecular Engineering & Sciences Institute.

“That’s important for individuals’ health and for all the research into how toxic oligomers of amyloid beta go on and cause the damage that they do”.

He added that the blood test, called the soluble oligomer binding assay (SOBA), “may be the basis of such a test”.

The team developed what is called an alpha sheet, which is a protein structure that binds to oligomers in blood or cerebrospinal fluid.

The test then confirms if the oligomers attached to the alpha sheet are made up of amyloid beta proteins.

The researchers tested SOBA on blood samples from 310 research subjects who had previously made their blood samples and some of their medical records available for Alzheimer’s research.

SOBA detected oligomers in the blood of individuals with mild cognitive impairment and moderate-to-severe Alzheimer’s.

In 53 cases, the research subject’s diagnosis of Alzheimer’s was verified after death by autopsy, while the blood samples of 52 of them, which had been taken years before they died, contained toxic oligomers.

The blood samples from individuals in the control group who remained unimpaired lacked these toxic oligomers.

Daggett said she thinks SOBA could therefore help to identify people at risk of Alzheimer’s early on.

The test can also be modified to detect toxic oligomers of another type of protein associated with Parkinson’s disease and Lewy body dementia.

“We are finding that many human diseases are associated with the accumulation of toxic oligomers that form these alpha sheet structures,” said Daggett.

“Not just Alzheimer’s, but also Parkinson’s, type 2 diabetes and more. SOBA is picking up that unique alpha sheet structure, so we hope that this method can help in diagnosing and studying many other ‘protein misfolding’ diseases”.

Developing tools to detect Alzheimer’s - or the risk of Alzheimer’s - earlier, could also have major implications for effective treatment options.

Scientists have hailed test results for a new drug, called lecanemab, which has been shown to reduce the amount of protein buildup in the brain.

The director of the UK Dementia Research Institute (UKDRI) at University College London, Professor Bart De Strooper, called it “the first drug that provides a real treatment option for people with Alzheimer’s”.

His colleague, Professor John Hardy, added that scientists “know exactly what we need to do to develop effective drugs,” and that life-changing treatments were now “on the horizon”.

As lecanemab clears the buildup of amyloid in the brain, catching that buildup earlier with the SOBA blood test could improve the chances of effective treatment.

Could baby formula made with human protein emulate breast milk?