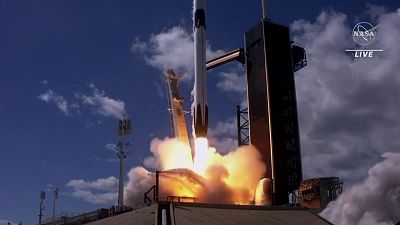 A SpaceX rocket has blasted off from Florida, carrying the next long-term International Space Station crew: a Russian cosmonaut, two Americans and a Japanese astronaut.

It’s the first time in 20 years a spaceflight carrying a Russian launches from US soil, in a show of ongoing cooperation in space despite tensions over the war in Ukraine.

The Falcon 9 rocket topped with a Crew Dragon capsule dubbed Endurance lifted off on Wednesday from NASA’s Kennedy Space Center in Cape Canaveral.

US and Russia's 'seat swap' deal

Kikina, 38, is Russia’s only female cosmonaut on active duty, and an engineer by training. She joined the flight as part of a "seat swap" deal struck between Russia and the US in July.

The long-sought agreement allows Russian cosmonauts to fly on US-made spacecraft in exchange for US astronauts being able to ride on Russia's Soyuz rockets.

Kikina is the Russian space agency Roscosmos' exchange for NASA’s Frank Rubio, who launched to the ISS from Kazakhstan aboard a Soyuz in September. He flew up with two cosmonauts.

After a journey of about 29 hours to reach the ISS, the members of the Crew-5 mission will replace the previous US-Italian crew that was at the station since April.

They will then conduct a 150-day science mission aboard the orbital laboratory, some 420 km above Earth.