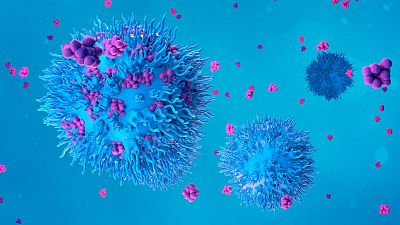 Scientists in the United States have managed to reprogram the immune system of patients to target their own cancers.   -   Copyright  Canva   -
By Nicole Lin Chang  •  Updated: 11/11/2022

Scientists in the United States have managed to reprogramme the immune system of cancer patients to target the disease, in a move that could pave the way for more personalised treatment.

The experimental trial was small, involving 16 patients with colon, breast and lung cancers that were unresponsive to treatment.

But researchers say their results demonstrate the safety and feasibility of using such technology, and mark a “leap forward” in the development of tailored cancer treatment.

In the study, which was published in the journal Nature on Thursday, researchers made use of the gene-editing technology CRISPR, which lets scientists edit genes by using biological "scissors" that can edit DNA.

This technology has previously been used to remove specific genes, allowing the immune system to be more activated against cancer, says the team.

But in what they say is a first, the researchers used CRISPR to not only take out specific genes, but also to insert new ones in immune cells, redirecting them to recognise and go after each patient’s specific tumours.

"When infused back to patients, these CRISPR-engineered immune cells preferentially traffic to the cancer, and become the most represented immune cells there," they said.

They hope this new approach could help increase the effectiveness of immunotherapy, a form of treatment that uses the power of the body’s own immune system to prevent, control and eliminate disease.

"This is a leap forward in developing a personalised treatment for cancer, where the isolation of immune receptors that specifically recognise mutations in the patient’s own cancer are used to treat the cancer," said Dr Antoni Ribas, one of the researchers at the University of California, Los Angeles, who worked on the approach developed by the company Pact Pharma.

Ultimately, the goal of any cancer therapy is to target and kill cancer cells while sparing normal cells, said the research team. It’s a task for which the human immune system is uniquely suited.

Their work involved looking at T-cells, a type of white blood cell which is part of the immune system and helps fight infection and disease, moving around the body to find and destroy defective cells.

These cells have receptors (proteins) that can specifically recognise cancer cells and differentiate them from normal cells.

The researchers began by sequencing DNA from blood samples and tumour biopsies from each patient, to look for mutations found in the tumour but not in the blood.

"The mutations are different in every cancer," Ribas told Nature. "And although there are some shared mutations, they are the minority".

After doing this, they used algorithms to predict which of the mutations were likely capable of provoking a response from T-cells and used this information to design T-cell receptors capable of recognising the tumour mutations.

They then took blood samples from each patient and used CRISPR genome editing to insert these receptors into their T-cells, which involved "knocking out" existing immune cell receptors and "knocking in" the immune receptors that could redirect those cells to specifically recognise their cancer’s mutations.

The edited cells were then infused back into the patient, after they were given conditioning chemotherapy.

Researchers found that the edited cells were circulating in the patients’ blood and had made their way to the tumours, becoming the most represented immune cells closest to them.

After undergoing treatment, the cancer stabilised in five patients, but continued to get worse in 11.

Two patients had potential side effects from the gene-edited cells, one with fevers and chills and the other with confusion, but both recovered “promptly,” said the research team.

Although the treatment’s efficacy was low, the study has demonstrated the safety and feasibility of such techniques, essentially providing proof of concept.

The team used relatively small doses of T-cells to establish the safety of the approach, Ribas told Nature, adding: "We just need to hit it stronger the next time".

Dr Astero Klampatsa, who was not part of the study, told Euronews Next that T-cell therapy has shown "remarkable success" in blood cancers, but has been tricky to replicate in solid tumours.

“This study is important as the first human trial in solid cancers showcasing the use of patient-specific, CRISPR-engineered T-cells that are able to identify specific antigens, or ‘flags’ on the patient’s tumour cells, prompting them to kill them,” said Klampatsa, who is the team leader of the thoracic oncology immunotherapy group at the Institute of Cancer Research in the United Kingdom.

"The study suggests there is future potential for T-cell therapy in solid cancers, and its safety profile is certainly encouraging," he said.

"However, there are also limitations that even the authors note: the time, labour and expense involved in the processes required to develop this therapy are huge and risky," he added.

"It would be interesting to see whether this therapy will be applied in a bigger trial, where efficacy, but also the experimental protocols, can be further tested".

Why is NASA sending ovarian cells and a 3D bioprinter into space?