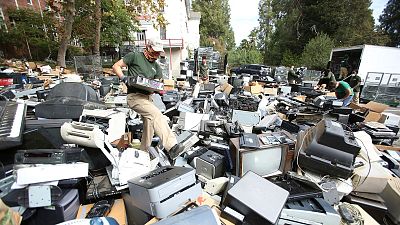 The world has a growing problem with electronic waste. Electronics are everywhere in our daily lives, from smartphones and computers to kitchenware, toys and wearable devices..

The WEEE Forum (Waste Electrical and Electronic Equipment Forum), an international not-for-profit, estimates that more than 5 billion mobile phones will be thrown away this year alone.

If these phones were piled on top of each other, the stack would be 50,000 km high – one-eighth of the way to the Moon.

According to WEEE, households across the EU own on average 74 electronic products, 17 of which are lying unused in our drawers and closets. Most of these are small consumer electronics such as headphones, cables, external hard drives and smartphones.

“People tend not to realise that all these seemingly insignificant items have a lot of value, and together at a global level represent massive volumes”, WEEE director general Pascal Leroy said in a statement on International E-Waste Day (Oct. 14).

They are also the most likely to be tossed away and bound for landfills or incineration instead of being properly recycled.

Europeans are the biggest producers of e-waste

The International Telecommunication Union (ITU), a United Nations agency, monitors e-waste closely. In its latest report on global e-waste, it estimated that in Europe, a person generated more than 16 kg of e-waste in 2019 - the world’s highest rate of e-waste generation per capita.

However, Europe also has the world’s highest e-waste collection and recycling rate, at 42.5 per cent. Asia ranked second at 11.7 per cent, the Americas and Oceania were similar at 9.4 per cent and 8.8 per cent, respectively, and Africa had the lowest rate at 0.9 per cent.

But data compiled by the EU shows most member states are failing to hit the bloc’s target of 65 per cent collection.

There are also major differences in performance between countries, as shown on this map (hover over a country to see its recycling rate).

Croatia leads the way with a rate of e-waste recycling of over 83 per cent. Sellers of electronics in the country are obliged to take in the e-waste customers bring in.

The rules state that if a retail store has more than 400 square metres dedicated to electrical and electronic equipment, it must ensure the collection of small e-waste (up to 25 cm) free of charge and without the obligation to buy new equipment.

It is also possible for anyone to request the removal of all types of e-waste for free anywhere in the country.

At the other end of the spectrum, Malta has one of the worst rates in the EU, with only 20.8 per cent of e-waste recycled.

A recent UN report blamed this mainly on the absence of a state-of-the-art e-waste collection infrastructure, competition from metal scrap collectors and a lack of enforcement from authorities.

The e-waste that is not recycled ends up hoarded in our homes, or tossed in the bin to be buried or incinerated.

Knowing that e-waste often contains toxic substances, it is both an issue for the environment and public health. And though Europe ranks first in terms of e-waste generation per capita, developing countries end up paying the price.

Yet, electronics are still filled with valuable resources such as rare earth materials, copper and cobalt - and campaigners say much more should be done to re-use them.

‘Right to repair’: How to tackle our e-waste problem

One of the options to reduce our e-waste is to repair broken electronics.

Since March 2021, the EU requires manufacturers of washing machines, dishwashers, fridges and TVs to make parts available to professional repairers for 10 years.

Officials are now working to expand this “right to repair” to smartphones, laptops and other small devices.

A European Parliament resolution adopted in April this year calls for products to be designed “in such a manner that they last longer, can be safely repaired and their parts can be easily accessed and removed”.

France has also introduced a mandatory “repairability” rating – from 0 to 10 – on a range of electronic appliances to inform consumers on how easy it is to find spare parts and get them fixed if they break.

Earlier this year, in a major blow to Apple, the EU decided that a single mobile charging port will be used for mobile phones, tablets and cameras by 2024. The move should finally help many consumers untangle the frustrating knot of cables that has formed in their drawers.