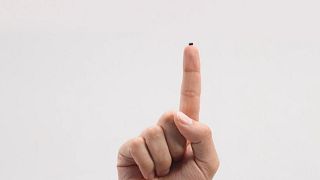 Microbatteries are between 100 microns thick (roughly twice the thickness of a human hair) and 2 millimetres thick for the largest.   -   Copyright  Courtesy of ITEN
By Oceane Duboust  •  Updated: 19/10/2022

Not only are they an environmental headache as they’re not rechargeable, but they’re also highly dangerous as children can swallow them and suffer serious internal burns.

A French start-up is working to fix that by developing rechargeable microbatteries that could replace them and also be used for a range of other applications, such as connected devices and sensors for healthcare.

ITEN, which is based outside of Lyon in France, is increasingly making a name for itself in the disruptive field of deep tech and it raised €80 million this month to expand its business.

Its shareholders now include the French state-owned bank Bpifrance, a key investor in local firms, and the French small appliances group SEB.

ITEN develops microbatteries – extremely small batteries that can be directly integrated into electronic circuits. They’re between 100 microns thick (roughly twice the thickness of a human hair) and 2 millimetres thick for the largest.

A multitude of possible applications

"To put it simply, every time you have an electronic circuit, potentially you have a microbattery," Fabien Gaben, the company’s founder, told Euronews Next.

These microbatteries can be used for tracking (think smart tags), to power sensors and watches, he explained. The medical field would also likely benefit from the new tech.

"Microbatteries can be used in surgical tools, in neurostimulators, in hearing implants, in contact lenses to make connected contact lenses,” Gaben said.

“What is interesting about these components is that the fact that they exist opens up the field of possibilities in terms of creativity, new devices and new medical tools”.

In everyday life, these microbatteries would be an alternative to the ubiquitous button cells found in electronic devices such as toys, remote controls and key fobs.

These are a major health hazard; a recent study published in the journal Pediatrics found that children are swallowing more button batteries than ever before, and that this has been causing an alarming rise in trips to the emergency room over the past decade.

If ingested, button cells can cause severe and potentially fatal harm to human tissue and organs. They can also easily get lodged in a child’s ears and nostrils.

What’s more, these button batteries are not rechargeable and after being used just once, they are very rarely recycled.

In amendments adopted on March 10 by the European Parliament, MEPs have asked the European Commission to assess “whether the use of non-rechargeable portable batteries of general use should be phased out”.

ITEN is betting on this momentum to highlight the greater sustainability of its microbatteries. "As the battery is a thousand times smaller, we put much less material in it," Gaben said.

The microbatteries are also much more durable, with a lifespan of 10 to 20 years according to the company.

They’re lithium-ion batteries made with solid – rather than liquid – electrolytes made of ceramic. This technology, known as solid-state batteries, is said to be stable at high temperatures, which minimises the risk of the battery catching fire and allows the battery to be soldered on a printed circuit board like other components.

The absence of rare earth elements in these batteries is another argument for the company, as Europe seeks to break its dependence on China for these resources.

Europe seeks to ‘reindustrialise’ itself

It took ITEN eight years to develop its microbatteries, and the company has filed more than 200 patents for them.

"To be able to make these components, we had to innovate from A to Z,” Gaben said. “All the machines that allow us to assemble them, to manufacture them in the form of miniature components, are special machines that we developed ourselves".

The batteries are exclusively developed in France, and the company has an entirely French shareholder base.

"It was important for me to develop in France. I have spent my entire career in the French industry, which has given me a lot. And I wanted to give back to French industry what it had given me,” Gaben said.

The company's fundraising with Bpifrance is part of a government “reindustrialisation” plan for 2030.

This is a broader trend across Europe. In January, the European Commission proposed the European Chips Act, a €43 billion investment plan to strengthen the continent’s capabilities across the semiconductor market.

From Dubai to Spain: How Huspy is disrupting the home-buying market