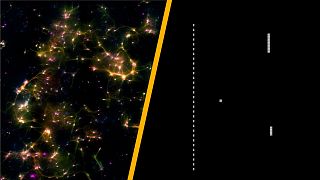 The classic 1970s arcade game Pong is so simple that apparently, anyone can play it – including brain cells in a lab.

Yes, you’ve read correctly. Scientists in Australia have taught neurons grown in a petri dish to learn how to play a basic video game.

The researchers say these “mini brains” can sense and react to their environment and using them for drug testing or computing could have far-reaching implications for health, technology, and society as a whole.

“Cultures display the ability to self-organise activity in a goal-directed manner,” reads their study published Wednesday in the journal Neuron.

Brain cells in a dish

“From worms to flies to humans, neurons are the starting block for generalised intelligence,” its chief scientific officer, Brett Kagan, said in a statement.

“So, the question was, can we interact with neurons in a way to harness that inherent intelligence?”

Kagan and his colleagues harvested neurons from embryonic mouse brains as well as neurons from adult human stem cells.

They then grew these neurons inside a lab dish. The experiment involved clusters of about 800,000 neurons, the size of a bumblebee's brain – a culture they nicknamed “DishBrain”.

Then they made DishBrain play Pong, a basic electronic ping-pong game that was very popular in the 1970s.

“We chose Pong due to its simplicity and familiarity, but, also, it was one of the first games used in machine learning, so we wanted to recognise that,” said Kagan, who worked on the project with researchers from 10 other institutions.

"What machines can't do is learn things very quickly – if you need a machine learning algorithm to learn something, it requires thousands of data samples,” he told the AFP news agency.

A dog, on the other hand, “can learn a trick in two or three tries".

How did the brain cells play Pong?

To “communicate” with DishBrain, the researchers used electrodes, sending a signal to indicate the position of the ball.

DishBrain answered with another signal to move the paddle. DishBrain was connected to a computer, through which the researchers gave feedback.

The stimulation was predictable (same location and frequency) in case of a win and random when it missed the ball. Over time, the neurons modified their behaviour to win.

In case it helps, this is what the process looked like:

A new understanding of intelligence

DishBrain has even tried Google’s Dinosaur Game, – the one you can play when your Internet connection dies, which consists of making a dinosaur run and dodge obstacles. The first results have been encouraging, Kagan said.

The team says the findings could have future implications in disease modeling, drug discovery – creating a potential alternative to animal testing – and more generally expanding the current understanding of how the brain works.

“This is the start of a new frontier in understanding intelligence,” Kagan said.

His team considers DishBrain to be "sentient," which they define as being able to perceive and respond dynamically to sensory information. But it is nowhere near being conscient, which implies being aware of its own existence.

"This is robustly conducted, interesting neuroscience," said Tara Spires-Jones of the University of Edinburgh, who was not involved in the study.

She emphasises that these remain simple – albeit noteworthy – circuit responses.

“Don't worry, while these dishes of neurons can change their responses based on stimulation, they are not SciFi style intelligence in a dish”.

The team working on DishBrain says the next step will be to see how it’s affected by medicines or alcohol.

Ukraine looks to the future with its first 3D-printed school