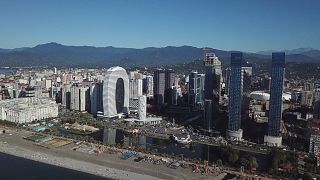 Batumi, the capital of the Georgian autonomous republic of Ajara is a city that has undergone an incredible metamorphosis in recent years, betting everything on tourism and becoming one of the emerging destinations in Europe.

Here the ancient and the modern coexist in perfect harmony. The streets and squares of the old city, where you can breathe its history, contrast with the huge, luxurious skyscrapers on the seafront.

The Pearl of the Black Sea is also the country’s number one business location, thanks to – among other reasons - its geographical position, its services, and its infrastructure.

All-in on tourism and infrastructure

And it is precisely on infrastructure that the local government is pushing hard. A strategy that attracts new investors, boosts the economy, and makes the city's international reputation soar.

An example is the new Batumi Stadium (Adjarabet Arena): a facility that cost more than 30 million euros and will host some of the European Under-21 football championship matches in 2023.

Another massive project that the government is very passionate about, is the Ambassadori Batumi Island: the creation of two artificial peninsulas and one island that will host modern resorts for wellness and recreation in the city’s seaside area.

Tornike Rijvadze, is the chairman of the government of Ajara.

"Our primary goal is to attract private investments as well as making Batumi one of the popular and emerging Europe's holiday destinations. Our idea is basically to cup (group) business, investments as well as new infrastructures, core infrastructures which will lead the foundation for sustainable growth of the city and for the autonomous region".

Luxury hotels, casinos, beaches, and all kinds of activities attract 2 million tourists every year. The Ajara government's plan is to triple this figure in the next three years. Tornike Rijvadze again.

“_We’re going to raise the bar in order to reach our top targets on the investment side as well as on the tourist side. In the next three years, our plan is to triple the tourists coming in Batumi and in Adjara and this can be done with everyday work, with the right strategy and right position_”.

The green Ajara at the center of the project

Tourism in Ajara is not limited to sightseeing in Georgia’s second city. The region has much more to offer.

The rich biodiversity of Ajara, with its protected areas and national parks - three of them were recently awarded UNESCO World Heritage status - lends itself perfectly. Within 30 minutes by car, you can find yourself surrounded by its breathtaking nature. Here you can hike, go birdwatching, go rafting, take a horseback ride, or, as we did, try a brand new activity: canyoning.

The Kapnistavi canyon with its seven waterfalls has been equipped in recent months to allow visitors to enjoy one of the most popular outdoor activities of the moment.

In canyoning, respect for nature is essential, as Giorgi Megrelidze, canyoning instructor explains.

“It's easy to combine this kind of activity with the preservation of the environment and I think is necessary, because this kind of outdoor activity's idea is to keep nature wild as it is and to do as less infrastructures as possible",

And at a time when outdoor activities have taken over, Batumi confirms itself as Europe's leading emerging tourist destination. In 2019 it received an award from the World Travel Awards, the Oscars for tourism. Moreover, Batumi is also nominated in 2022 in the same category, and the ceremony is due to take place on the 1st of October.

Ajara and its capital continue to bet its future on tourism, enriching day after day the offer for tourists who decide to come and visit this region, where, really, there is something for everyone.