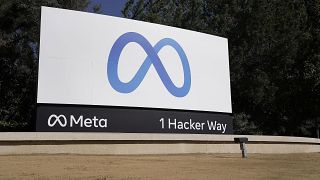 Meta says the fake networks have been removed for violating their policies.   -   Copyright  AP Photo/Tony Avelar, File
By Euronews  •  Updated: 27/09/2022

Facebook's parent company Meta says it has removed networks of fake accounts that were based in China and Russia.

The fake networks had reportedly impersonated news websites to criticise European countries for supporting Ukraine during the war.

Meta said in a statement that they had been removed for violating the company's policy against "coordinated inauthentic behaviour".

The network of fake Russian accounts is the largest group that Meta has disrupted since the war in Ukraine began in February, Meta added.

The Big Tech company offered no evidence that the fake networks were linked to either the Chinese or Russian governments, but it did say that the networks would have needed "technical and linguistic investment".

According to the report, a large network of fake Russian accounts had targeted a number of European countries with narratives about the Ukraine war.

The group created and shared links to over 60 websites which impersonated legitimate news outlets, such as Der Spiegel, The Guardian, Bild, and ANSA.

The network of over 2,000 Facebook accounts and pages spread pro-Kremlin narratives in France, Germany, Italy, Ukraine and the UK.

"They would post original articles that criticised Ukraine and Ukrainian refugees, supported Russia and argued that Western sanctions on Russia would backfire," Meta said.

"As we blocked this operation’s domains, they attempted to set up new websites, suggesting persistence and continuous investment in this activity across the Internet," the report said.

The company said that some of their fake activity was amplified by the social media accounts of Russian embassies.

Meanwhile, Meta said that the small network based in China worked across multiple platforms to target US domestic politics ahead of the 2022 midterm elections.

The report added that fake accounts also tried to influence foreign policy in the Czech Republic towards China and Ukraine.

"This activity was primarily anti-government, criticising the state’s support of Ukraine in the war with Russia and its impact on the Czech economy," Meta said.

The company said that few social media users engaged with the network and that a number of accounts have since been removed.

"We shared information with our peers at tech companies, security researchers, governments and law enforcement so they too can take appropriate action," said Ben Nimmo, Global Threat Intelligence Lead at Meta.

"We’re also including threat indicators to help the security community detect and counter malicious activity elsewhere on the Internet".

Russia adds Meta to list of 'terrorist and extremist organisations'