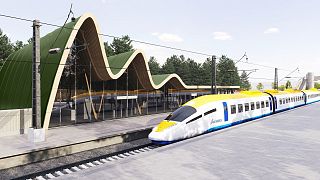 The largest infrastructure project in the Baltic region for a hundred years is under way.

The 870 km Rail Baltica project will connect the capitals of Lithuania, Latvia, and Estonia with Warsaw and the rest of Europe, allowing trains from the continent to run uninterrupted.

However, the project is symbolic as well as physical.

For the EU, it’s a statement about the Baltic states’ return to Europe and their decoupling from their Soviet past.

Talk of an inter-Baltic rail project has grown since the late 1990s, with a cooperation agreement being signed by Estonian, Latvian and Lithuanian transport ministers in 2001.

However, it wasn’t until 2010 that a memorandum was signed by representatives of the transport ministries of Poland, Lithuania, Latvia, Estonia and Finland.

While it currently takes seven hours to drive from Lithuania’s capital to Estonia’s, the new line will almost halve that to just three hours and 38 minutes.

The railway will begin in Tallinn before passing through Pärnu, Rīga, Panevėžys, and Kaunas before reaching the Lithuanian-Polish border; there will also be a connection to Vilnius from Kaunas.

Once completed, trains will be able to travel up to the Baltics from Poland, with passenger trains operating at top speeds of 234 km/h.

While the project doesn’t come cheap at an estimated cost of €5.8 billion, the project’s cost-benefit analysis predicts the project would bring in up to €16.2 billion in quantifiable benefits.

The project’s cost for the Baltic countries is alleviated due to the EU funding up to 85 per cent of the project through its Connecting Europe Facility (CEF) instrument.

So far, the EU CEF fund has contributed €824 million to the new line.

The scheme is so colossal that its construction alone is expected to create 13,000 direct full-time jobs and another 24,000 indirect jobs.

Once completed, the line will form the latest addition to the EU’s North Sea-Baltic Corridor, a trans-European route including key cities such as Rotterdam, Berlin, and Warsaw.

For passengers, there will be regular connections with at least one international train service every two hours, resulting in eight train pairs daily in each direction.

As well as making passenger journeys quicker, the project will also lower freight costs and offer a time-efficient way of transporting mass cargo.

Perhaps more important for the EU than the economic promise of the project is its political message.

While the Baltics used to be connected by European rail standards of 1435 mm gauge, since its Soviet occupation, the region’s rail system adopted the Russian gauge which is 1524 mm.

This difference severely limited the Baltics’ ability to connect with Europe by rail, as passengers or cargo would need to be reloaded onto a new train at the Polish border before continuing on.

Because of its Russian gauge, the Baltics have typically relied on a West-East axis, with much of its rail trade coming from Russia.

However, since gaining their independence in the 1990s, the Baltics have swung towards Brussels and away from Moscow.

The countries joined NATO in March 2004, and accession to the EU quickly followed in May; both moves infuriated Russian president Vladimir Putin.

In the face of growing Russian aggression, all three countries were already looking to increase interoperability with the rest of the EU, but Putin’s invasion of Ukraine has added urgency to that.

In August, the project attracted military mobility funding from Latvia’s funds, demonstrating the civil and military characteristics of the scheme.

"In the current geopolitical conditions, the strategic significance of the Rail Baltica project is increasing," Latvia’s Transport Minister said at the time.

"It is particularly important to ensure reliable connectivity with Western Europe and to fully use the new rail transport connection with Europe to increase our country’s defence capabilities".

The decoupling of the Baltic state’s rail network from Russia is not the only area where the countries are trying to reduce their reliance on Russia.

Another legacy of Soviet occupation is that the Baltics’ electricity power grids are synchronised with Russia’s centrally controlled network, raising fears that Russia might cut power to the countries.

The Baltic states have agreed to complete desynchronisation from the Russian power grid and synchronise with European networks by 2025.

However, in July, Reuters reported that the European power grid network ENTSO-E would connect the Baltic states’ grids within 24 hours if the countries were to be disconnected by Russia.

Criticism of the project

Like all large projects, Rail Baltica hasn’t been without its critics.

Speaking to Emerging Europe last year, Priit Humal, board member of the civil movement Avalikult Rail Balticust (Publicly About Rail Baltica), explained that Rail Baltica is as controversial in the Baltics as HS2 is in the UK.

He went on to say that the major difference relates to differentials in GDP, stating that Rail Baltica is three times more expensive for Estonia than HS2 is for the UK.

There have also been concerns over the certainty of EU funds.

Any decrease in EU funding would need to be made up by national governments, which could lead to higher levels of public opposition to the scheme.

However, with multiple parts of the project now under construction, it seems unlikely that the scheme will hit the buffers before its predicted completion in 2026.