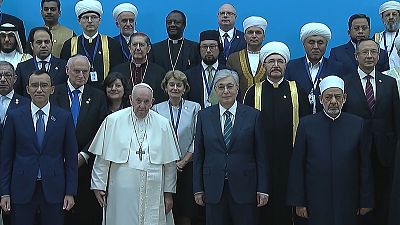 Kazakhstan is home to 18 religious’ denominations, making it one of the most ethnically diverse countries in the world.

In September, it opened its doors for a global interfaith dialogue. Its capital Astana hosted the 7th edition of the Congress of Leaders of World and Traditional Religions. Delegates from more than 50 countries came together, urging peace and consolidation around the world.

“The efforts of world leaders, the efforts of international organizations are not enough to overcome the challenges that humanity is facing. And the voice of spiritual leaders who have great authority among the world's population, calls for the joint overcoming of all the challenges. This is very important,” says Askar Shakirov, the deputy chairman of the senate of Kazakhstan.

"We have a common goal but we are no longer looking at our differences but we are recognising our common concern, for those who struggle or suffer."

Islam, Judaism, Christianity, Hinduism as well as other world religions were represented at the Congress. This year Pope Francis as well as the Grand Imam of al-Azhar Sheikh Ahmed Al-Tayeb were among the renowned guests.

“The main result is that we are sitting together, we are speaking together and we are understanding that to find solutions for the problems in the world is not by fighting, is not during by war, but sitting together and speaking,” David Baruch Lau, the Ashkenazi Chief Rabbi of Israel said to Euronews.

One of the goals of the congress is to reintroduce the language of reconciliation and peace to a world shattered by conflict and tragedy. It also strives to put religion in the spotlight as a tool to help defuse confrontations.

The final declaration of the Congress calls upon world leaders to abandon all aggressive and destructive rhetoric, which leads to destabilisation in the world. It demands a cease from conflict and bloodshed in all corners. It says that extremism, radicalism, terrorism and all other forms of violence have nothing to do with authentic religion and must be rejected.

Participants of the Congress planted trees in the new Peace and Harmony park in the capital of Kazakhstan. This ceremony is a symbol of hope for the interfaith dialogue to grow and bring about change, to unite different communities across the globe and to inspire people to join their efforts in the name of peace.

“We talk about global peace, but I would say those steps begin at the local level,” says Jo Bailey Wells, the Anglican Church’s special representative. “They begin in every small town where Christians and Muslims perhaps [live] together, they seek to feed the hungry. So, we have a common goal but we are no longer looking at our differences but we are recognising our common concern, for those who struggle or suffer.”

The participants of the Congress hope that their appeal for global dialogue, reconciliation and peace based on common values of humanity, shared by all world religions, is heard across the globe.

Watch the video report by clicking the player above.