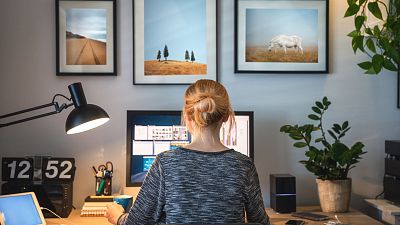 Around one-quarter of workers globally would quit or start looking for another job if they were told to return to the workplace five days a week   -   Copyright  Canva
By Pascale Davies  •  Updated: 14/09/2022

With summer over, many employers are trying to get their staff to return to the office to pre-pandemic levels or at least part-time.

Since the start of the COVID-19 pandemic more than two and a half years ago, companies have embraced the working from home or hybrid work model.

But some employers, such as Tesla boss Elon Musk, are demanding that their workers return to the office at least 40 hours per week.

Other companies, such as Apple, are trying to persuade their employees to return to their desks three days a week.

The problem is the majority of staff do not want to go back to the office, at least not full-time, creating tense discussions with some bosses.

Around one-quarter of workers globally would quit or start looking for another job if they were told to return to the workplace five days a week, according to a global research paper published on September 7.

The survey also found workers would take a 5 per cent pay cut to keep the option of days at home.

The shift to remote work “benefits workers,” the researchers said, adding, “the reason is simple: Most workers value the opportunity to WFH (work from home) part of the week, and some value it a lot”.

Some companies have been stricter on returning to work, most notably the bank Goldman Sachs - whose CEO David Solomon previously called work from home an “aberration” - with the company announcing this month that it was doing away with all COVID-19 restrictions.

Others have been looking at more flexible patterns that maintain some level of remote work.

“Employee mental health improved and productivity increased by 16 per cent with the hybrid model,” Emilie Sidiqian, head of Salesforce France, told Euronews Next.

Salesforce France has implemented a “flex-working” approach, which means that employees must be in the office 1-3 days per week but teams can decide which days.

“It means that the culture should be based on trust, trust in order for your employees to still care,” said Sidiqian.

The company also put in a fully remote option, for those who do not live near a Salesforce office and for roles that do not require an in-person presence.

But for those who do need to be at the office, which Salesforce says is a small fraction of its staff, there is a 4-5 day requirement to be present at the office.

It means that the culture should be based on trust, trust in order for your employees to still care.

Last year, Salesforce took over the communications company Slack, which Sidiqian said has been crucial to keeping lines open between staff during the pandemic shut-down. But it is not the only benefit of Slack.

“Through Slack, you see people that are maybe more introverted expressing themselves or sharing ideas and making the community alive.

“And so to me, it's also fantastic because you can see new talents raising their hands, showing also their ability to develop that career path. And I think it's also an opportunity to develop talents in a very different way,” she said.

Tech is also changing the way we work

With an increasing number of companies trying to retain and attract staff with the hybrid work format, communication technology and data security become extremely important.

You're going from just trying to survive and operate during the pandemic to [it being] much more about the employee experience in a hybrid working environment.

Not only should the technology be developed so that offices are prepared should there be a future pandemic, but cybersecurity will also be key, argued Sidiqian, pointing toward the importance of protecting cloud services.

“What we’re seeing is really the evolution of a lot of the collaboration technologies to become more immersive experiences,” Andy Baldwin, Global Managing Partner at EY, told Euronews Next.

He said the metaverse is being used more for meetings and for recruitment.

“You're going from just trying to survive and operate during the pandemic to [it being] much more about the employee experience in a hybrid working environment,” he said.

In certain countries, where perhaps 4G or 5G networks are not as strong and accommodation is not always appropriate to work from home, more and more people are coming back to the office, Baldwin said.

But in general and in the West, he thinks the hybrid model is here to stay.

“I think hybrid working with a sort of a core of around two or three days a week will be much more the norm for the next couple of years in Europe, probably parts of the US as well”.

These are the top 5 EU cities for remote working

Pay transparency can help close the gender pay gap but at what cost?

Menopause leave: Is it the next workplace right?