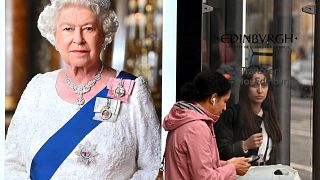 Pedestrians walk past an image of the late Queen Elizabeth II at bus stops in Edinburgh on September 9, 2022, a day after Queen Elizabeth II died at the age of 96.   -   Copyright  OLI SCARFF/AFP or licensors
By Pascale Davies  •  Updated: 09/09/2022

The 70-year reign of the late Queen Elizabeth II saw much innovation and technological development throughout her lifetime.

The shifts in technology had already started after she ascended the throne following the death of her father George VI in February 1952.

Her coronation in June 1953 was the first in Britain to be broadcast in almost its entirety on television rather than radio, although the images were in black and white.

During her long reign, the methods of communication changed dramatically, from now outmoded means like telegrams to the advent of the Internt and the rise of social media.

But that isn’t the only big invention to shake up society.

Euronews Next takes a look back at the key innovations from Elizabeth II’s reign to the present day.

Queen Elizabeth was no stranger to bombs and the threat of war, having lived through World War II. But shortly after she became queen, the world’s deadliest weapon was tested.

On November 1, 1952, the United States tested the world’s first hydrogen bomb, or H-bomb, in the Pacific Marshall Islands. The USSR followed soon after as did the United Kingdom in 1958.

It was a real-world threat during the tense Cold War era and remains so to this day, even though the H-bomb has not yet been used in a conflict.

It is said to be more dangerous than the atomic bomb, which splits Uranium and causes a reaction. An H-bomb, however, has a two-strike attack. It carries a much bigger blast, causing a massive impact even further away and then spreads radiation above the planet.

The Cold War escalation also advanced the race to space, or Space Race, as it is officially known and began in 1955 when the USSR responded to a US announcement that it would launch the first artificial satellite into space with one of its own.

Major developments were seen in space exploration, including Soviet cosmonaut Yuri Alekseyevich Gagarin becoming the first human being to travel into space in 1961 and of course the first manned mission to the Moon on July 20, 1969 when the US astronaut Neil Armstrong became the first human to walk on its surface.

The Queen met Armstrong and the other Apollo 11 astronauts Buzz Aldrin and Michael Collins on their return when they visited Buckingham Palace.

In 1953, Dr Jonas Salk announced on a national radio show that he successfully tested a vaccine against poliomyelitis, the virus that causes the life-disabling disease of polio.

Just two years later, it was administered in the US and eventually came over to Europe.

The vaccine was met with apprehensiveness, but in 1957 the Queen announced both her children Prince Charles and Princess Anne had been inoculated against polio when they were children and most at risk of catching the disease.

During the coronavirus pandemic, the Queen also advocated for the COVID-19 vaccine. In a video shared on The Royal’s social media account, she said: "Once you've had the vaccine you have a feeling of, you know, you're protected, which is I think very important".

"As far as I could make out, it was quite harmless," she said.

The ARPAnet, the predecessor and technical foundation of the Internet, was born in November 1969.

By 1976, Elizabeth II sent her first email using a military machine that was connected to the ARPAnet.

The official birth of the Internet is considered in 1983 with the communications protocol TCP/IP. However, what we know as the World Wide Web (WWW) was created later in 1989 by the British scientist Tim Berners-Lee and made available to the public in 1993.

In November 1972, the video game Pong was released by the American company Atari. It is one of the earliest video games that saw players use two paddles to volley a ball back and forth across the screen, much like a virtual table-tennis.

Since then, gaming has developed to include the Playstation, Xbox and the more advanced Nintendo Wii.

A new era of gaming is also upon us: the metaverse, where you can use augmented reality and virtual reality headsets to feel you are in the game.

Of course, games have also changed to become more complicated than Pong and much more realistic.

The mobile phone and smartphone - 1973

The first mobile phone, a much bulkier model than we are used to today, came out in April 1973.

Though it wasn’t especially used that much at the time, it was the foundation of the devices that we are glued to today and couldn’t imagine a life without.

But it wasn’t until 1994 that the first smartphone was invented. IBM created the first one called the Simon Personal Communicator (or just IBM Simon). It was available for purchase in 1994.

In September 1973, the first supersonic passenger commercial airplane the Concorde made its first transatlantic flight. The aircraft was built jointly by British and French manufacturers and went on to fly across the world, including New York in 1977.

Elizabeth II flew on the Concorde for the first time in 1977 to Barbados, which was also the aircraft’s first venture there.

Since the world’s first “test tube baby” was born in July 1978 in Manchester in northern England, in vitro fertilisation (IVF) has helped those experiencing infertility issues to have children.

The process removes an egg from the woman's ovaries and fertilises it with sperm in a laboratory. The fertilised egg is then returned to a woman's womb to grow and develop.

Though some were sceptical about the process at the time, its estimated more than 8 million babies have been born worldwide through IVF.

Dolly the sheep famously divided opinion when she became the first mammal to be cloned from an adult somatic cell in a Scottish laboratory in 1996.

Though she died from lung cancer in 2003, Dolly was vital to advancing stem cell research for treatments, such as lukemia and other chronic diseases.

In the early 2000s, what became known as social media took root on the Internet with Myspace and Facebook changing the way we communicate. Later on, other companies such as Twitter, Instagram and TikTok also developed.

The British monarchy has also dabbled on social media and an outpouring of grief for Elizabeth II can be seen from millions of social media users around the world.

How will the Queen's funeral impact certain services in the UK?